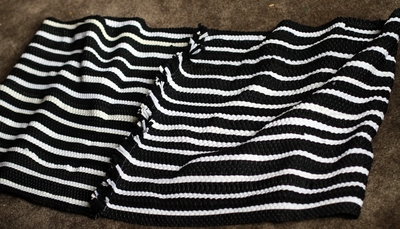 Sew the rugs together:

Sew two rugs, right side together, along the fringed side. Make sure they are sewn securely.

Add the third rug to the other side of one of the rugs, sewing right sides together along the fringed side. Make sure the seams are all on the same side of your long rug.

Sew the two ends of the two outside rugs together, sewing right sides together along the fringed side.

You now have a tube. It’s a very short tube with very large openings. 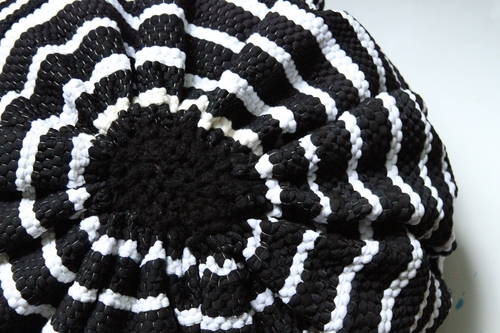 Crochet/gather the top of the tube:

Using a medium-large crochet hook and regular acrylic yarn, insert hook in top edge of rug tube and slip stitch around the top of the tube, with a stitch about every half inch. On your second row, decrease by the following method: Draw up a loop in next stitch. Again, draw up a loop in the next stitch. (There should now be 3 loops on the hook.) Yarn over hook. Draw yarn through all 3 loops on the hook. (One decrease made). Draw string as tight as possible between each decrease stitch. Continue around the rug until it’s gathered all up. This might take four or five rows around.

For an illustrated guide to decreasing: (How to decrease in single crochet)

If you don’t crochet:

Use yarn and a large plastic needle to weave in and out of the edge of the tube, drawing as tightly as possible. Cut a cover for the puckered area out of complimentary-colored circle of felt, wool felt, or a felted sweater and sew over pucker. 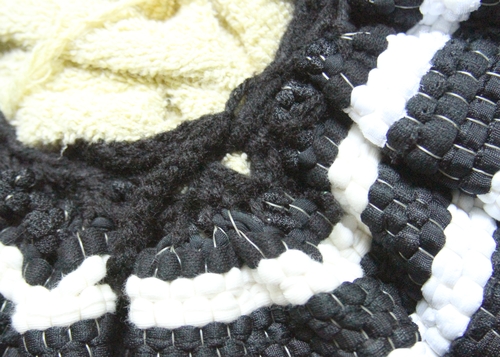 Gather the bottom of the tube:

You can gather the bottom of the pouf in the same way as above, but stuff the pouf before the hole gets too small. I actually created a drawstring effect on the bottom of my pouf so I could stuff and unstuff it at will.  Instead of gathering all the way to the center of the circle, I left it open and threaded a string through the edges so I could tie it closed. 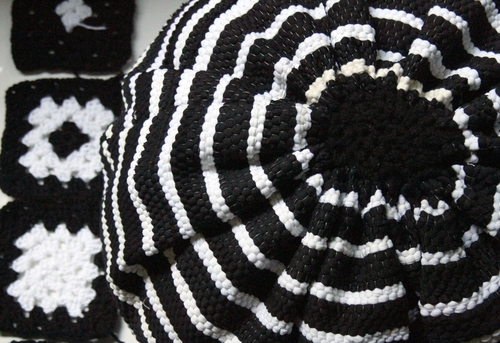 For the sample, I stuffed it with a large fleece blanket and towels, but you can buy a body pillow and use the stuffing inside it for a cheap alternative to fiberfill. Or stuff it with recycled packing peanuts, or your large collection of plastic grocery sacks (if you don’t mind the plastic crinkly sound effect!). 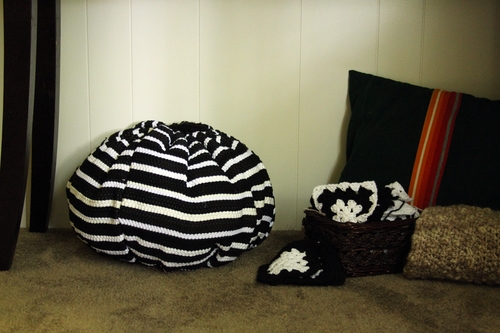 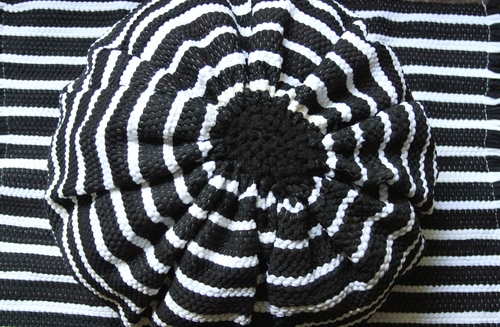 Linked up at Decor on a Dime