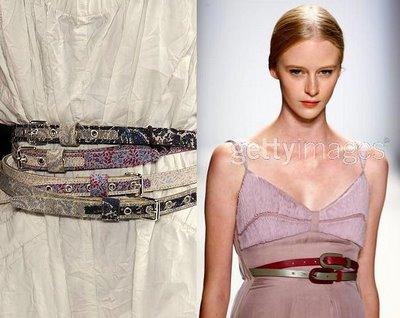 Cara at Carbon Couture advises how to capture this upcoming hot look inspired by several high fashion designers’ spring 2009 looks. Marc by Marc Jacobs and Aurelio Costarella both showcased the multiple-belt layered look, and you can have it, too, with this super simple fashion DIY project.

Simply take two belts and buckle them together, making one long belt. Wrap them around your waist twice and buckle. Instant wow! Be sure to visit Carbon Couture for more info and photos on this technique.