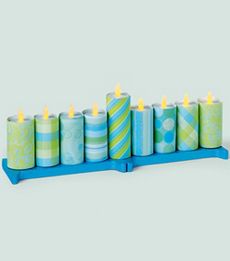 Make a menorah using battery-operated tealights and some pretty scrapbooking or holiday paper. [project: JoAnn Fabrics]. There’s a list of suggested materials. You could definitely find some substitutions that are less expensive than their suggestions.

This would be a great safe menorah for kids to light, since the tealights look like fire but aren’t!