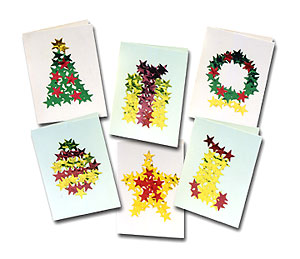 Stuck in a cubicle and wish you were home crafting? Get out those metallic star stickers and some cardstock and make some holiday cards when your boss isn’t looking.* This is also a great idea for a kids’ activity. You can lightly outline the shapes you want on cardstock, and then let them fill in the blanks with stars. [project: bhg]

*Just kidding! I would never advocate stealing from your company! Do it on yer own time, ya schlub!