If the cast of Project Runway were dropped off at the dollar store, no doubt they would be tempted to use the fleece scarves, as they yield so much real fabric ripe for transformation. Dollar store fleece scarves come in many colors, and only need a little embellishment to take them from drab to fab.

These hand-printed scarves from Curbly serve as great inspiration for what you can do with the humble fleece scarf:

The project appears to be a basic stencil, so you really just need a fleece scarf, fabric paint, and something to cut your stencil out of. An easy way to make a stencil is to print your image on a piece of paper, cover the paper with clear packing tape (both sides), and cut it out with an exacto knife. Or if the image isn’t too detailed, scissors also work. Adhere the stencil to your fabric (either spray the back of the stencil with spray glue, or just tape the stencil on with masking tape), and paint. You can use a brayer (one of those rolly rubber things that looks like a paint roller) covered with fabric paint, or a brush or sponge will work just fine.

Fleece scarf dollar store projects are abundant, so I thought I would showcase a few of the cute embellished ones I’ve found. Use these as inspirations for your own creations: 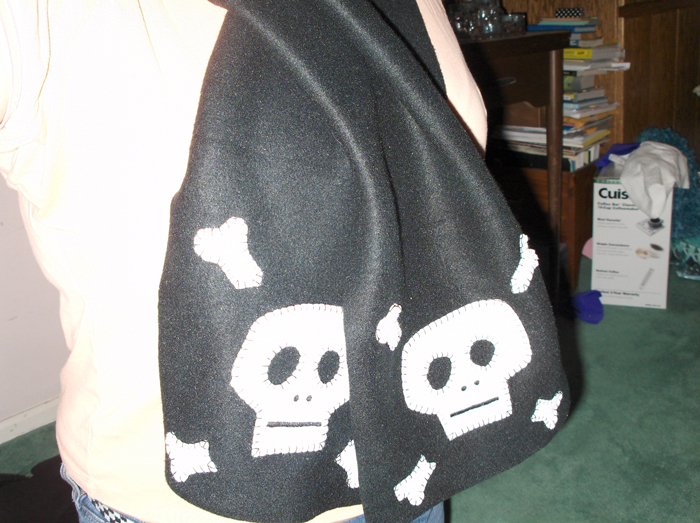 Felt applique is cute, as in this Skully scarf by reese52.

This fleece scarf has appliques added. I also like the scalloped edge. From So Very Varied.

You can make a scarf into a hooded scarf with some very simple sewing. From About.com 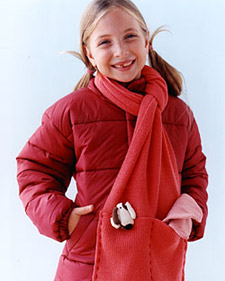 Martha Stewart Kids teaches you how to make a scarf into a cute pocket scarf. Easily done with a dollar store fleece scarf.