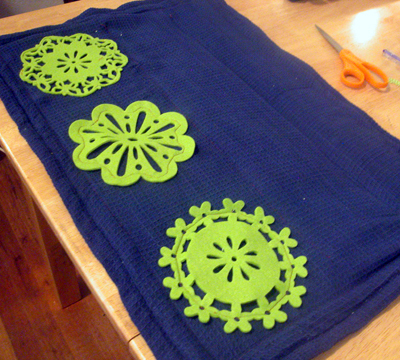 Using a few bucks’ worth of materials from the dollar store, I made a spankin’ new non-skid bathmat in my favorite colors. 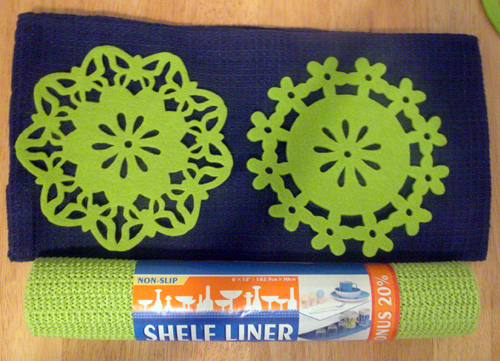 I
bought a 6′ roll of shelf liner to use as the non-skid surface on the
bottom of the mat. A large blue waffle-weave dishtowel was perfect for
the bathmat surface, and these cool felt cutouts were a good way to
dress up what otherwise would have been too plain. I also added an old
towel from my stuff to sandwich in between the other layers. It
provides some extra absorbency and nice cushion to the mat.

First,
I sewed the snowflake cutouts onto the right side of the dishtowel. I
just sewed around them with my sewing machine. It might be a good idea
to tack the centers down as well. 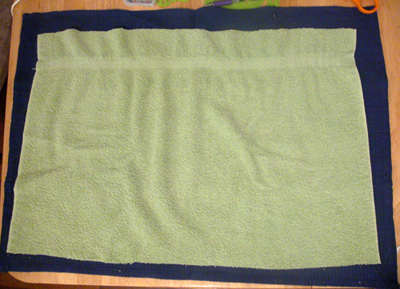 After
the appliques were sewn, I laid the dishtowel out on my work surface
and then cut a piece of towel to fit inside it–about an inch shorter
around all sides. (After I took the picture, I decided to cut another
piece that didn’t have that puckery piece at the end of the towel, as
shown. It was a good choice!) 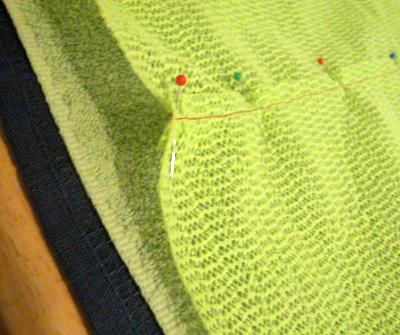 Then
I rolled out the shelf liner and measured it to the same size as the
green towel. It wasn’t wide enough, so I had to cut two pieces of the
shelf liner and sew it together. I just used a straight seam, figuring
it won’t really be seen. You could also sew it right sides together and
then put the seam-side facing in toward the towel.

Before I
started the project, I was concerned that the shelf liner stuff would
stick to my sewing machine plate as I tried to sew on it. It worked a
lot better than I was afraid it might, and went through without
sticking.

After the shelf liner was sewn, I trimmed it to fit and then put it on top of the dishtowel and the towel. 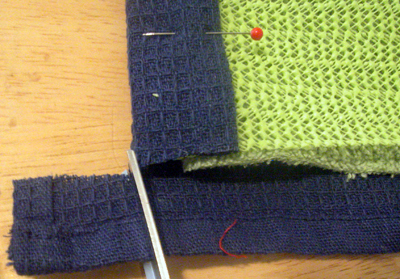 Then
I folded the dishtowel edges over and pinned them all the way around
the mat. I cut the corners of the towels out as shown because I wasn’t
sure my machine would sew through the thickness of the corners. If you
wanted to be a bit neater (and avoid a bit of a raw edge at the corner
after it’s sewn), you could cut across the corner diagonally and fold
the diagonal in and then fold over and sew.

After it was pinned,
I sewed all the way around the mat, and then turned it over and sewed
around the perimeter one more time to add topstitching. Then I sewed
across the mat just above the appliques, and then about 1/3 of the way
down from the top, just to keep the towel inside from shifting. If you
have one, you will want to use a walking foot for this step to keep the
top layer from shifting as you sew it.