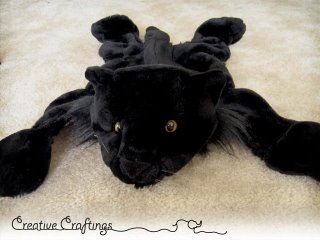 The Best of DIY tells us how she made a faux animal skin rug out of a stuffed panther. I just saw a huge bin of pretty decent plush bears at the dollar store that would be great for this project. And of course, there’s always a glut of stuffed animals at the thrift store, including some huge ones for less than $5. [buy this rug]

Now someone just needs to design a toy taxidermy project for us. Never mind, I think I just did it by typing that sentence. What would we need for that? A wooden plaque, some paint, a stuffed animal and some glue, that’s what. Sounds like a $2 project to me! Okay, a baby room with a toy-hunting theme? Morbid, but hilarious.

So, for the Toy Animal Skin Rug: