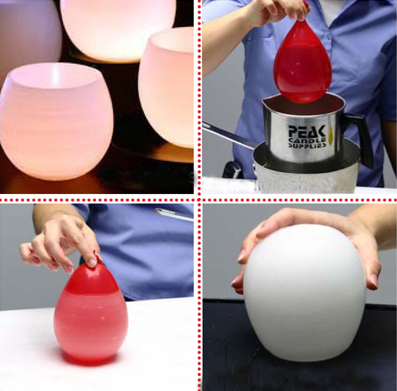 Candletech has instructions for the coolest candle-making project I have EVER seen! Using balloons filled with lukewarm water, you can make these amazing candle luminaries by dipping balloons in wax. I love the organic shape of the luminaries, and this project looks so fun! They are so elegant, and nobody would ever guess you used dollar store materials for this project! These would be great table decorations for a wedding or other formal occasion, or just pretty to scatter around your home. [click here for full instructions from candletech]

The comments section of the tutorial also provides a lot of valuable insight for making this project. Commenters had better luck with 7″ or 9″ balloons (instead of the water balloons used in the tutorial). Use battery-operated tea lights to avoid melting through the luminaries (the metal-cupped tea lights can possibly get warm enough to melt through), or add sand in the bottom of the luminary to keep the tea light from melting through.

Other commenters suggested adhering something to the outside of the wax to add additional interest (although I just LOVE them as they are!), or using multiple colors of wax in several dips and then carving away to allow different colors to show through.

The project recommends high-melt paraffin wax to avoid the melting issue when used with tea lights. If you use battery-operated tea lights, you will avoid this issue and can use other kinds of wax to
make your luminaries. Melt down candles from the dollar store, perhaps? Get beeswax from your local beekeeper or farmer’s market?

*one commenter said s/he made 15 luminaries out of about 8 lbs of paraffin, so figure about half a pound of wax per luminary. You will likely need multiple blocks of wax from the grocery store to get started.