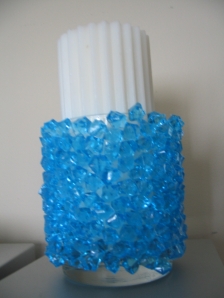 I love the look of this bejeweled candle holder made by Lisa from East Coast Bungalow. She covered an old highball glass with some plastic gems she found at the dollar store. I love the color of the gems! I think the effect is pretty striking. This would be a great technique to use on a vase (you could use a narrow water glass), or what if you did something like this on a chandelier?