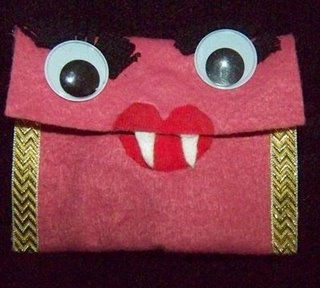 Kathryn at Crafts and Creations With KMom14 posted this cute dollar store craft project: a girly monster coin purse. Inspired by the Monster Coin Purse at Cut Out + Keep, she created the girly monster with supplies she purchased at the dollar store, including a little sewing kit she used to stitch it together!

This also looks like a great project for stashbusting. I love the dollar store, but I love using up what I already have even more! You can substitute almost anything for the components in this project: buttons for googly eyes (or just felt circles?), fabric or fleece for the body, ric rac for the ribbon.

Total cost: FREE and beyond

Thanks to Kathryn for submitting this fun project! Keep the projects coming, readers! I love to see what you are making with stuff from your dollar store!