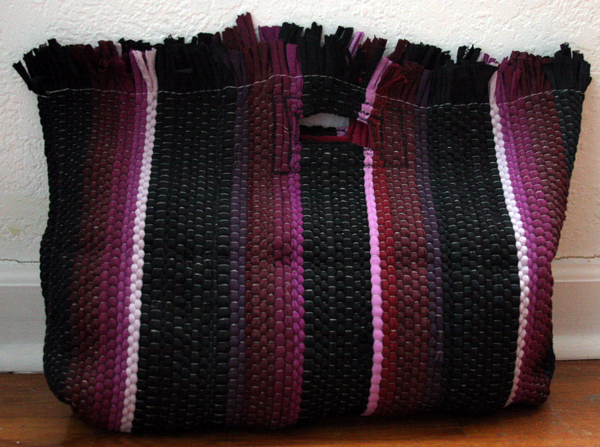 This is a quick and simple sewing project using a rag rug to make a cute handbag. It will take you less than an hour (probably much less, like 15 minutes) to make. This is a VERY SIMPLE sewing project: if you are afraid of sewing, this is a pretty good place to begin.

I was inspired by last week’s Placemat Clutch project by Spool to make a bag out of a rag rug, using a similar technique. Because the rag rug is woven, though, the handles needed to be reinforced.

You can find small woven rag rugs at your local dollar store for $1, or at Ikea for around $2, or anywhere else for less than $5. I found a great selection of colors and styles at my local dollar store, so I picked up a pretty purple rug to make into a roomy handbag. I would use this bag for a yarn/knitting bag, but it would also be great for a beach bag. 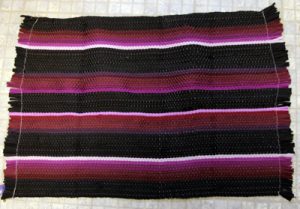 You will sew handles on both ends of the rug, about an inch below the seam. Use a zigzag stitch and make a rectangle about 3 inches long and 1 inch tall. Place half of the felt square underneath the area where you sewed the rectangle. Sew around the rectangle again to reinforce the handle area. Then sew a bigger rectangle around the first one.

This will reinforce the places where you cut away – you will be compromising the integrity of the weaving, so you’ll need to compensate for it by sewing these reinforcing stitches. You can’t sew too much reinforcement in this step!

After you are happy with the amount of reinforcement, you will trim out the inside of the center rectangle on both the rug and the felt, making a hole that will become the handle. Trim away any excess felt around the reinforced area. 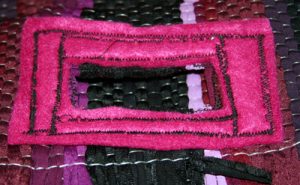 Here’s a photo of the felt after it’s been reinforced and trimmed. The felt will go on the inside of the handbag.

If you want to do any other embellishment of the bag, do it now before you sew up the sides. You might want to sew a strip of ribbon, ric rac, or lace, or add an applique.

Step 2: Sew up sides of bag

Fold the bag in half, with felt reinforcement side showing on the outside. Sew up each side. 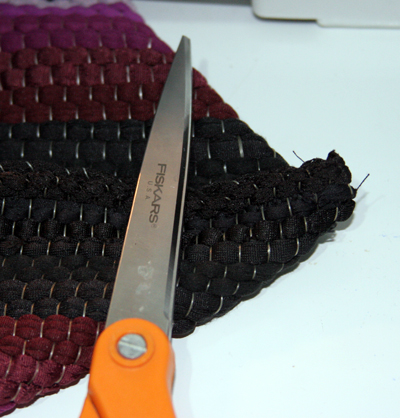 Open bag and fold so sewn seam is flat down the center of the bag (as shown). Kinda like sewing origami! You will sew across this triangle about one inch from the corner of the bag. (You’ll sew where the scissors in the photo are laying across the corner). This will create a gusset that will give the bag a bit of width. If you need more info on sewing a gusset, check the Spool tutorial.

Turn the bag inside out, and you’re done! 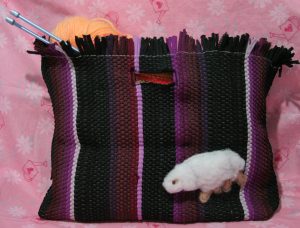