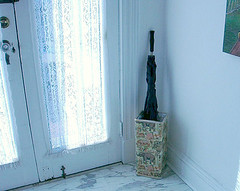 Blogger and DSC reader Dawn from Madison Avenue Baby posted this unique recycling tutorial: an umbrella stand. She recycled a cardboard box and lined it with waterproof material, and covered it with cool wrapping paper that she got at the dollar store.

I live in the Pacific Northwest (where it is famous for being so rainy). You would think that every home would have an umbrella stand, but I can’t recall ever seeing one. That’s probably because many native Oregonians (can’t vouch for Washingtonians!) don’t use umbrellas at all. All that to say, this is a very cool project that I would never have thought of, but I could definitely use! (I said we don’t USE umbrellas, not that we don’t OWN them!!)

The project uses some items that you might not have on hand. I’m pretty sure Dawn would recommend that you use whatever you already have on hand that might work.

Other supplies you will need that you have on hand are: scissors, craft knife, stapler, paint brush, sandpaper, rag, glue, mod podge.

Thanks Dawn, for sharing your tutorial!