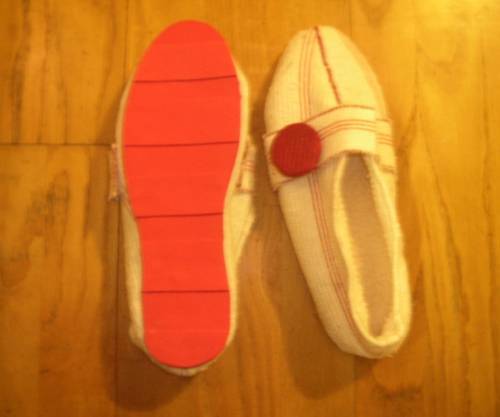 Craftster user demekah made these shoes completely from scratch using stuff she got at the dollar store. The soles are made from craft foam, and the uppers are made from dish towels. The “button” is a poker chip!

I have been meaning to try to make slippers or shoes out of stuff from the dollar store, but this project just knocks my socks off (ha ha!). I am not nearly as detail oriented as demekah appears to be, so anything I make would pale in comparison to these! (But don’t worry, that probably won’t stop me from trying! I have to keep supplying you with content somehow!) Woo hoo, I used like three cliches in this paragraph! And oh, the exclamation points!

You have to check out the Craftster thread to see how she made them – she gives a pretty detailed account of how to make shoes. Awesome! I love these.