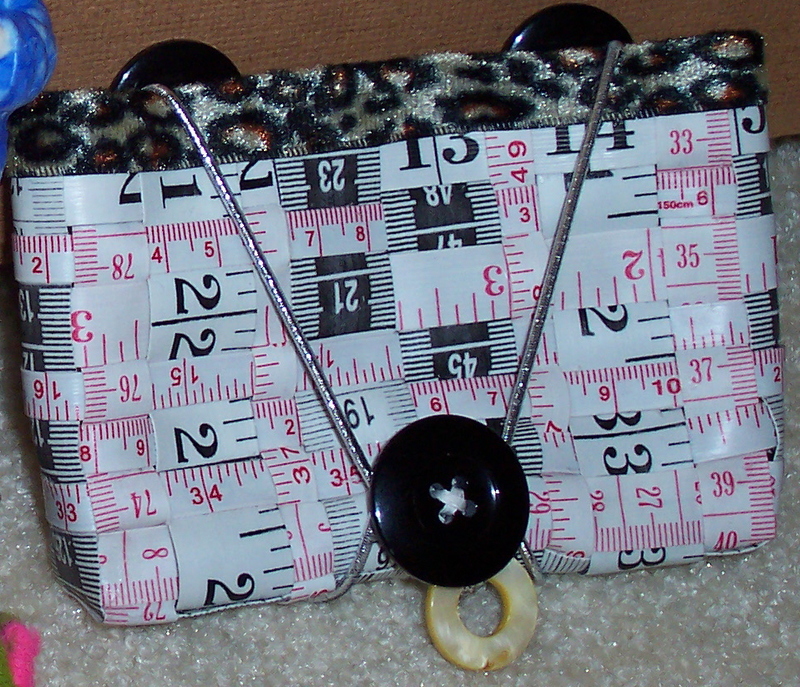 Apparently measuring tapes are inspiring me this week, since this is the third project I’ve brought you that uses measuring tapes. You have to see this thread at Craftster wherein user BigMouth posted about six different woven measuring tape projects! I love the yellow pouch with the ric rac accent- too cute! The red and black one with the big black button was made with dollar store measuring tapes. 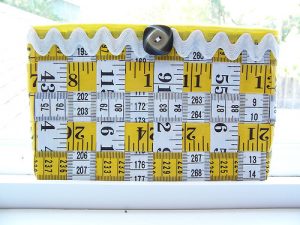 The process doesn’t sound like the easiest thing ever (BigMouth called herself “masochistic” for starting a 2nd woven measuring tape project!), but the payoff certainly is big! BigMouth says: “They’re woven like baskets.  Bottom first, then sides.  Self-adhesive Velcro doesn’t work on measuring tapes.  Even E6000 requires a bunch of clamps and a lot of insistence.” After a couple of pouches, BigMouth changes her tune and says: “I figured out a better way to weave it (do the bottom AND one side first, then fold and finish).  It ended up neater, too–it’s a more consistent weave and it doesn’t have tighter and looser rows.”

And then later in the thread, she gives us more info:

I think I used 6-7 tapes for the large purse.  Most of those were long ones (120″).  It’s a little hard to pin down exactly how many I used, because I included salvageable pieces from my misguided first attempt and ended up with leftovers.

Jo-Ann (in their Jo-Ann Essentials stuff) has the lavender measuring tapes for $.49 each.  They’re 60″ long and 1/2″ wide, and they may not be there much longer (they don’t seem to be restocking).  I found the store-brand 120″ x 3/4″ tapes are only $.79 at Michaels (white), but about twice that at Jo-Ann.  I found several different styles and color combinations just by looking around.  Check out the “Jo-Ann Essentials” for other color combinations, too (like the white & blue).

I used E6000 glue to help keep the tapes in place.  I slathered some on one of the surfaces with a toothpick before I stuck them together.  I also put a tot staple (Hello Kitty, circa 1983, if you must know

) to connect the ends of each tape.  I made sure all those were “hidden” on the inside–but I don’t know how to line a bag, so they’re visible from the inside (I made sure the top of the staple faced inward).  As the bag took shape, it required less glue until I reached the top.  At the top, I used a lot of glue and clamped it down with bag clips from the kitchen until it dried.  I cut the ends off, and put trim on the top.  Then I obsessively rolled off all the visible globs of E6000.  Yum.

The glue and staples make it easier to put the bag together, but I don’t think they’re necessary for reinforcement.  The measuring tapes are fiberglass and they’re woven–so it’s a double thickness at every point on the bag.  It’s pretty stiff.

The measuring tapes are sturdy, but they’re still quite floppy and annoying.  They’re made to be flexible, after all.  At one point, I rolled the loose ends up and held them in place with bent paperclips or something.  That helped a bit, but then they were really heavy.  I don’t remember whether it actually helped. The glue helped a lot for keeping the tapes in place while weaving.  I don’t know whether it even matters in the final product (except at the top, where it definitely matters).

Oh, and a little warning:  E6000 can discolor some measuring tapes.  I saw some yellowing on the white tapes, as well as some discoloration on the yellow and lavendar tapes.  So don’t overdo the glue.

So, that should get you started on your path to tape measure weaving! Looks like it’s cheaper to get these at a fabric or craft store than at the dollar store. 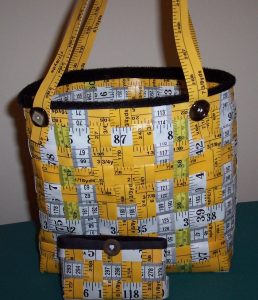