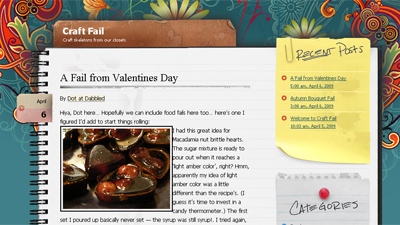 If you are a crafter, then you’re probably familiar with those times when the project you’re working on just doesn’t quite measure up. Blogging crafters will admit that when they have a craft fail, it usually doesn’t appear on the pages of their blog because it isn’t exactly something they want to shout from the rooftops about!

A few crafty friends and I were together on Saturday, and we thought it would be fun to have a blog where we could share our craft fails.

So, I started another blog yesterday called Craft Fail. Craft Fail is a community blog dedicated to sharing our not-so-successful crafting attempts. Anyone who has crafted and failed is invited to participate. More info about the site and how to join here.

I consider this part of my Make Something Cool Everyday project!