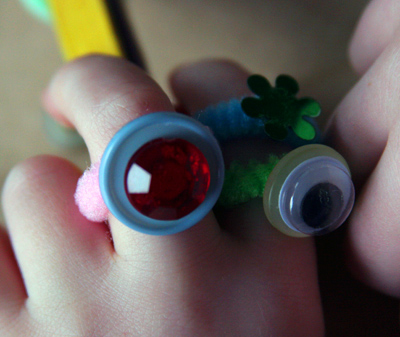 For my first Make Something Cool Everyday (MSCE from now on) project, I took some colorful little baby hair elastics that I’ve had on hand and used them to make cute costume rings. I originally bought the elastics thinking I would make them into some kind of springy garland (which I might still do, since I have to make something cool 30 times this month!), but I came up with the idea for the rings when my son was playing with the elastics.

These would be a great addition to a little girl’s jewelry box or dress up kit. Tweens will enjoy making them, and teens might enjoy wearing them too. This would be a fun activity for a scout troop, classroom, or slumber party. They’d also be a great party favor for a dress-up or princess-themed birthday party. Make these for kiddos over age 3 because they can be a choking hazard.

Buttons plus anything else glued on top of them are always cute (I’m a particular fan of buttons + a plastic rhinestone), so that’s where I started. I also added googly eyes, flower-shaped confetti, and some dismantled earrings I had into the supply mix. You could even go Earth Day on this and use small discs of recycled cardboard or other recycled materials (fabric! plastic!) You could also skip the glue and just use stickers for an instant gratification project.

I used QuickCraft glue (it dries quickly!) but hot glue or even a needle and thread would be good. 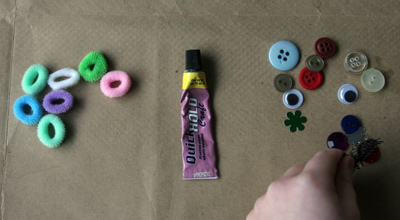 Total cost: Less than a penny each!

Check out the MSCE April challenge at Dabbled.