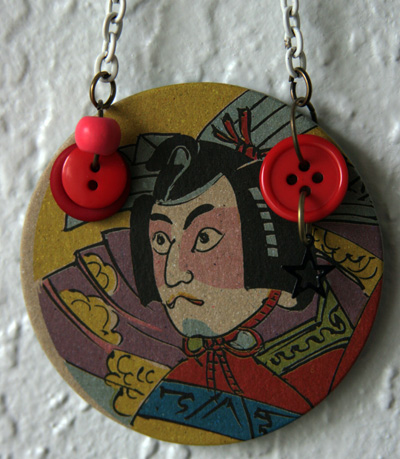 Have you ever heard of Menko? I hadn’t either until I picked a package of cards up at Daiso (the Japanese dollar store!). Menko is a card game that is supposedly easy to play although I haven’t quite figured it out yet. That’s okay, though, because I wanted to make stuff with these amazing cards! I can think of a bunch of cool applications for these. At last weekend’s Handmade Nation weekend, I had some of the most brilliant crafty minds around thinking about what we could do with the cards.

For my project today, I punched two small holes in one small round card and made it into a pendant with some random jewelry-making stuff I have. The wooden beads are from the dollar store, and I recycled the white chain from another necklace I had.

Total cost: About $1 for one necklace, including supplies

I still haven’t told you about my trip to Daiso in Seattle! I got so much cool stuff, and I totally never posted about it here at Dollar Store Crafts. You can check my Flickr stream for pictures of what I got, though. So far I haven’t done much crafting with the things I got, but since I pledged to try to Make Something Cool Everyday with stuff from my dollar store stash, I have been looking at my goodies and trying to determine what to make!