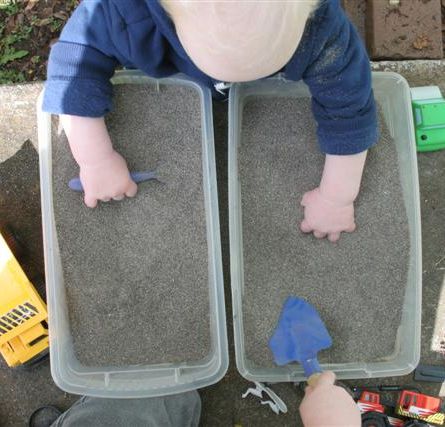 My kids are drawn to the dirt, so I wanted to make them a sandbox. I like the idea of a sandbox: a fun place for the kids to play in semi-clean dirt. In practice, I’m not that excited about having a huge sandbox in a corner of our yard, open to the elements and neighborhood animals, with two tons of sand in it. Even a small sit-in sandbox would likely have 300 pounds of sand. I couldn’t move it if I tried! Here’s a great dollar store crafts alternative: make a portable mini-sandbox from a plastic bin! [Other Make Something Cool projects]

This project is quick, fun, and cheap, and would be a fabulous party activity (and party favor to take home), scouting activity, daycare, or picnic activity. Basically anywhere there are kids, this would be a fun one. Because you only use part of a bag of sand per box, it particularly lends itself to groups of 5 or so.

I made two bins because I have two boys, and also because it expands the sandbox area a bit, but still leaves the boxes comfortably portable, with about 8-10 pounds of sand each. I added some “treasure” (idea from my new favorite blog Filth Wizardry) in the form of some rocks and shells I had on hand. Kitten Muffin used shiny beads for her treasure, which is also brilliant. I also added some spare kitchen spoons, some plastic animals, and of course, the boys used their construction vehicles.

You can get these shoebox-sized bins at the dollar store (that is, if you don’t already have a few of them on hand). You can get rocks, shells, and other trinkets to add to the sandbox, if desired. The dollar store also has an array of beach sand toys at this time of year you can get. I say just use what you have on hand, though!

The sand: you will most likely need to hit the local home improvement store for some sandbox sand. I bought a 50 pound bag of it for under $4. Like I said, the boxes probably hold about 8-10 pounds, so you can make five mini sandboxes with one bag of sand.

Playing with the boxes: These can go anywhere, but may I suggest somewhere away from the entryway to your house?

p.s. Here is another great idea for a larger (but still manageable) thrifty sandbox at Thrifty Craft Mama.