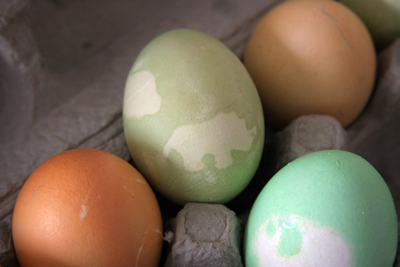 The project was simple today: putting dollar store animal stickers on eggs before we dyed them (and by “we” I mean my 2 year old). I helped with the stickers, but he was strictly in charge of dyeing. [More Make Something Cool Everyday projects]

We used foam animal stickers (previously seen in a few of my dollar store crafts) and stuck them on hardboiled eggs that were clean and dry. I made sure the stickers were stuck down as firmly as possible and then we dyed the eggs.

To make the dye:
I filled a little tupperware cup halfway up with very warm water, added some food coloring and a little vinegar.

When you remove the eggs from the dye bath, dry them with a paper towel and then peel the stickers off. You can also under-dye an egg, dry it off completely and then stick stickers on and re-dye. Final color of the egg will vary, though, because you’ll be mixing colors!

This technique worked decently. It might be better with a different kind of sticker!