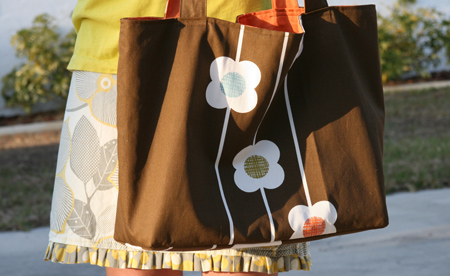 This adorable large tote is made of Orla Kiely dish towels from Target (will run you more than a dollar, but oh so fashionable!). The tutorial was created by Film in the Fridge. I know I’ve featured several dishtowel bags here before, but this one is a little more finished–it’s lined, has inside pockets and a solid bottom, and uses four dish towels. Different, right? [click here for full tutorial]

The tutorial looks good for beginner-plus seamsters. Of course, you can use dollar store dish towels at $1 each (I’m basing the cost estimate on that). I would also substitute a plastic insert in the purse bottom (Ashley uses cardboard) because I have toddlers and everything has to be highly washable! I’m not exactly sure what would work best… a piece of plastic cut out of a busted plastic storage container? Maybe you have some good ideas for this!