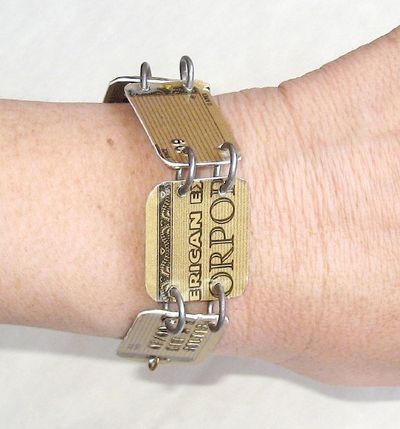 If you’re really into saving money, hopefully you’re done using credit cards. But don’t just cut them up and toss ’em – make them into something awesome! The Scavenging blog posted a tutorial for making your plastic into cool jewelry. Thanks to Woof Nanny for the tip. [full tutorial instructions here]

Even if you aren’t getting rid of all your credit cards, you do have to replace them periodically. I love the idea of making them wearable. Scavenging uses a drill to make the holes in the cards, but I wonder if a small craft punch would do the job? Some other very basic jewelry-making components will help here, too. I’ve seen jump rings, clasps, chain, and all kinds of other jewelry-making stuff at my local Dollar Tree! Oh, and make sure you don’t include ALL the numbers on your jewelry, just in case you lose the piece, or it falls into the wrong hands!