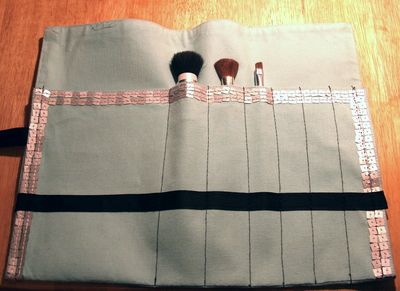 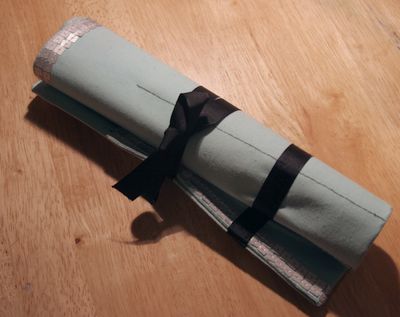 Because you are using a placemat as the base for this project, you only need to sew a tiny bit (all in straight lines, I promise!). The project ends up taking less than a half hour, even if you have an ancient (and finicky) sewing machine like mine.

Choosing a placemat: my placemat was fairly stiff with interfacing, and had sequins sewn around the edge. My sewing machine had no trouble sewing through a double-thickness of placemat plus sequins. If you find a placemat that isn’t as stiff, I think it will still work just fine! 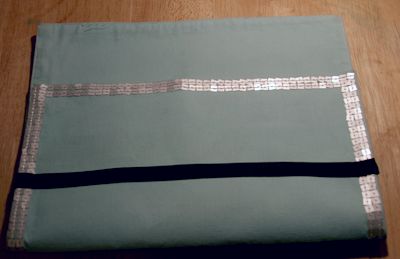 1. Fold placemat over as desired to acommodate the length of your makeup brushes. Crease with your hand or an iron.

2. Pin decorative ribbon across placemat if desired. This is the time to add any other embellishments, too. Possibilities: sew buttons on, stencil or embroider a design, applique, etc. I used two stripes of ribbon that I lined up on the front and back of the makeup carrier. 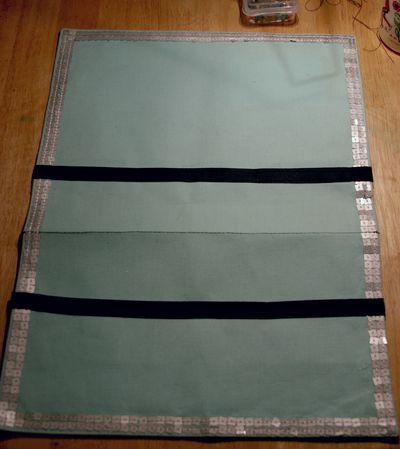 3. Sew embellishments on. I sewed my two rows of ribbon. (Optional) Sew a line across area where you creased/ironed. 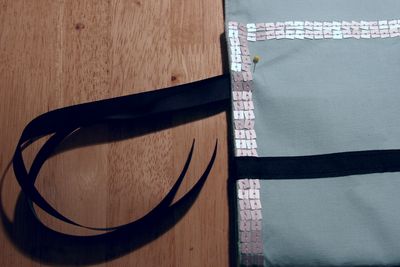 4. Cut a length of ribbon twice as wide as your placemat. Fold in half, and pin folded side between the folded placemat. This will be the tie for your makeup roll.

5. Line up ribbon (if you’re doing the same thing I did) and pin sides together. Starting at fold, sew straight line down each side of pocket, reinforcing at the open edge of the pocket. 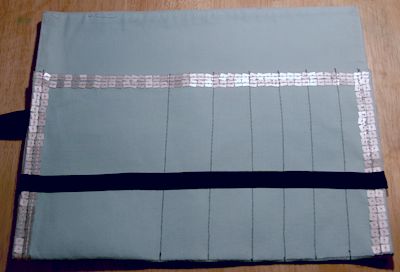 6. Sew lines down pocket for brushes. You might want to put a brush in after the first line sewn, just to be sure the brushes fit. Because the carrier is flat, you will want to make the pocket lines wide enough to expand a little when a brush is put inside. In other words, a wider pocket is better.