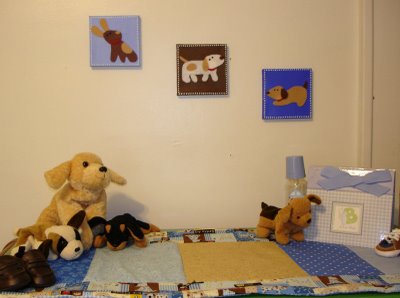 The Masked Mommy has some cute themed crafts that she did to accompany her son’s puppy-themed nursery. She remade some dollar canvases into pup-tastic art that accents the nursery. [instructions here]

She found the canvases in the dollar bins at JoAnn Fabrics (the fabric and craft stores are starting to catch on! Michael’s has dollar bins now, too!), repainted them and added felt cut-out puppies. So cute! You can use whatever you have on hand, too, like pieces of wood, or even dollar store frames. Just customize according to your decor and taste.