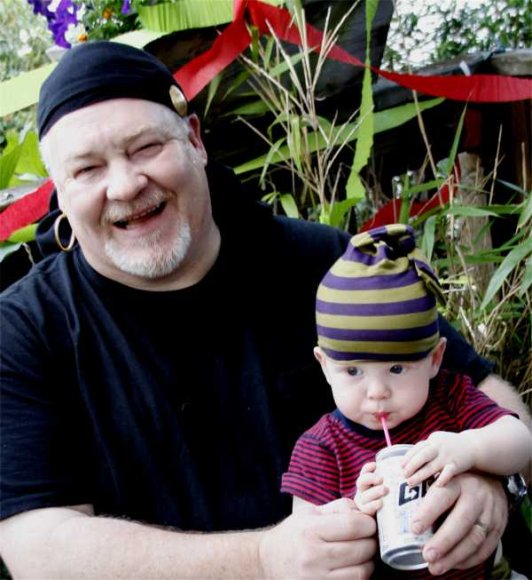 You don’t have to spend a lot of money for a birthday party! There are lots of things you can do to keep costs down and keep things fun and festive.

For my first son’s first birthday party (in 2007), I had a pirate-themed party. I asked all the guests to come dressed as a pirate. Here’s grandpa and the birthday pirate boy. I made the boy’s swabbie stocking cap out of a sleeve from a thrifted shirt. He wore a striped onesie he already had, and some pants with elasticized ankles that sort of look like short breeches or something. I put some of my own striped socks (pulled up tall) on him.

Things to do to keep things cheap but fun: 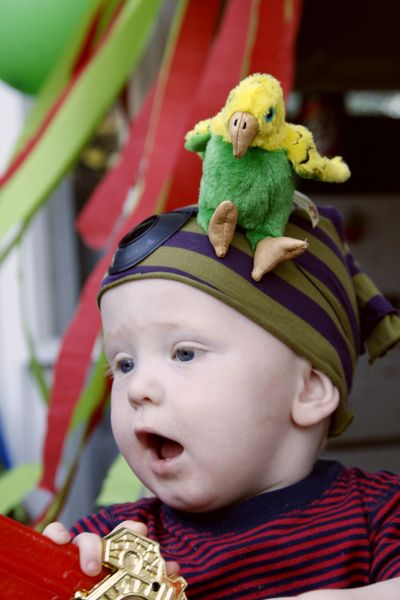 Pirate boy later got an eyepatch, a parrot finger puppet (gift), and a plastic sword (gift) to round out his outfit.

Dressing up as a pirate was fun! One of the reasons I chose the theme (besides liking pirates a lot) is because everyone should be able to cobble together a piratey outfit from things they can find in their closets. For mine, I used a blue bandanna, a stripey shirt covered by an old work vest (turned inside out), rolled up pants, a chiffon tie around my waist, white knee socks and black buckled mary jane shoes. I also added a funky plasticky necklace because it had funny pirate charms on it.

If you choose to have a costume/dress up party, try to choose a theme that won’t require special costumes or equipment. Good themes for this: pirate, cowboy, prince or princess, army man, etc. If you have a party for kids and ask them to wear a costume, it’s nice to include a list of suggestions for those parents who aren’t as creative as you are!

Everyone interpreted the pirate look differently, which just added to the fun. 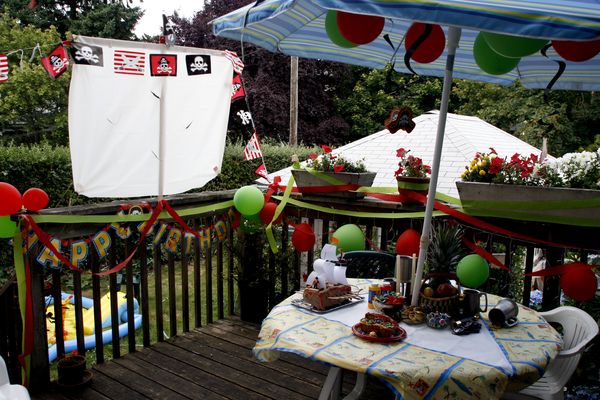 I used the back porch as our “ship” and made a sail out of two long wooden stakes I got at Home Depot for less than a buck. I stapled a plastic tablecloth to the boards for a sail. I got the pirate flag garland, and some of the other piratey decorations at the dollar store. I used the pirate tablecloth on the table, and the excess was hung up on the wall for extra decor. Also, I swear by using crepe paper and balloons to decorate for a party because they are easy and cheap, and make a huge impact for very little money. They also help make the photos really colorful and festive! 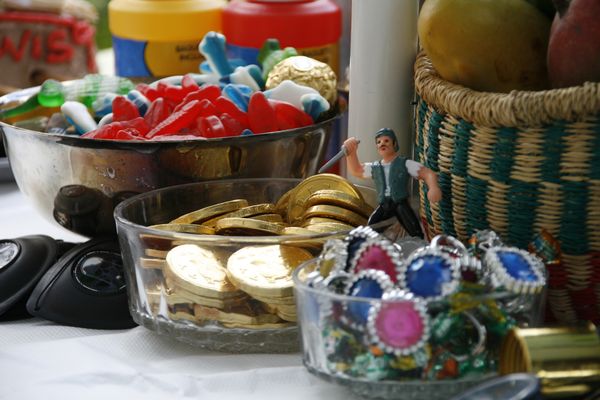 I decorated the party table with “booty” displayed in decorative bowls and baskets we already had on hand. Some of the party booty: Gummy fish (bulk from Winco), gold coin chocolates, dollar store jeweled rings, dollar store eyepatches and spyglasses. I put tropical fruit from the grocery store in the basket to add to the atmosphere. 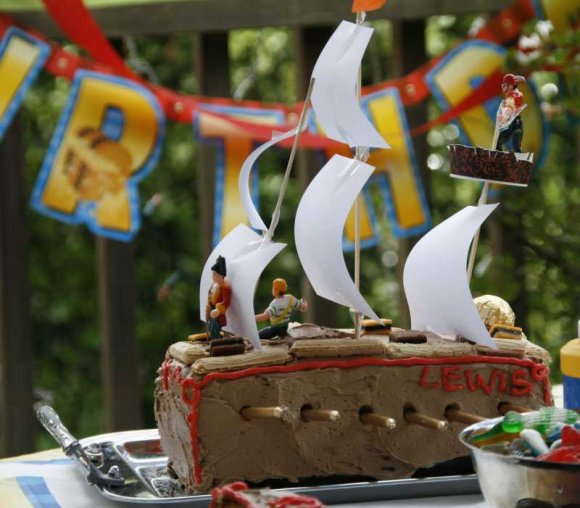 Pirate ship cake made out of cake (baked in a loaf pan) decorated with cookies and candy to make it look more piratey. I had long gold candles that I stuck out of the sides of the cake to look like cannons. Bamboo skewers were threaded through paper sails, and a paper cup became a crow’s nest. Plastic pirates from the party store manned the ship. 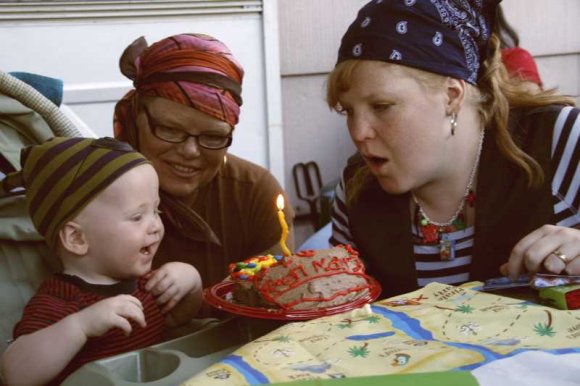 Since I love first birthday parties to have a special cake for the special guest, I made a small loaf cake and cut it open to make it look like a treasure chest with M&M treasure in it. 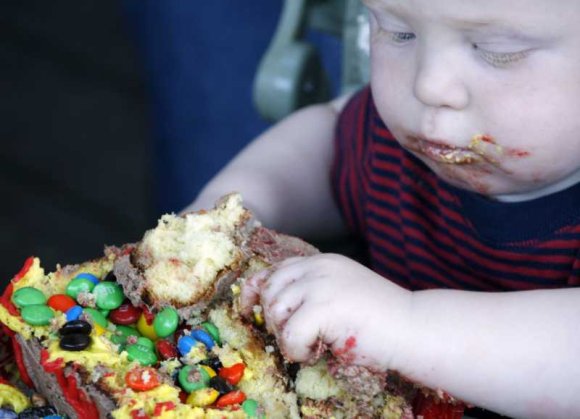 You gotta have that gratuitous first birthday cake shot!

I know my son won’t remember his first birthday, but I had a lot of fun planning it, and it was a great way to start out my birthday party giving traditions!