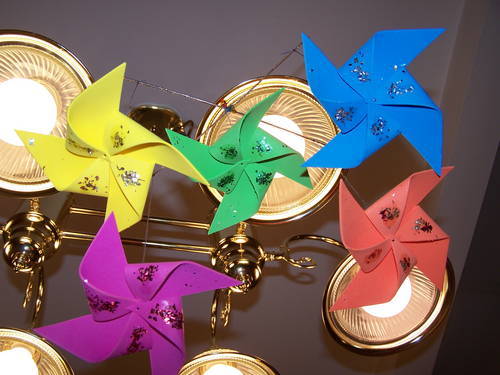 Craftster user nikimac made a clever and colorful mobile with craft foam pinwheels. This would be really fun for a kid’s room or as decorations for a birthday party (can you imagine a WHOLE BUNCH of these hanging from the ceiling, kind of like an anthropologie display?). Pinwheels are simple to make and whimsical, and this shouldn’t take you too long, so what are you waiting for? [see original project posted here]

I got some more dirt on how to make them from Niki:

I used craft foam (although you could use any tough paper too) and cut it into square shapes.  I folded along the diagonals (corner to corner), and trimmed halfway down the folds toward the center.  I brought the corners to the middle as shown and secured with a straight pin.  I trimmed off the pointy part with some wirecutters and bent the remainder into an eye (leaving a little slack so that they would spin easily).  Then I tied heavy thread to each pinwheel, and tied the other end onto the ends of one of two sticks (I used these ones that my Dollar Store has for decorating floral arrangements – they have curliques at the top that I cut off before).  The last pinwheel I tied to the middle of both sticks and added another little thread to hang the whole thing.  I just had to scoot the ties around on the sticks for it to hang balanced, then I added some glitter for sparkles too (I’m not sure I like where I added it – in retrospect I probably would have taken more time and brushed the edges of each pinwheel in glitter).