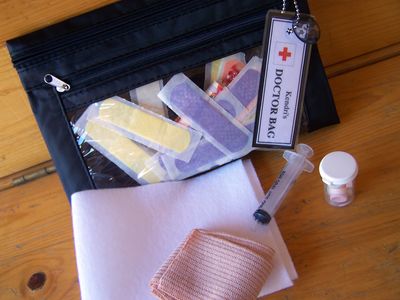 Amber from The Brush Barn came up with this fun take-along kit to entertain kids on the go: a Doctor Kit. [click here for Amber’s blog]

I am preparing for a trip to Fl and coming up with some travel idea for my kiddies. This is one I finished. Could also be used for church, car, etc. I made two for about 5.00 (so 2.50 each). My kids love it, keeps them entertained for hours. They lay the animal on the bed, give him a play shot, wrap him with an ace bandage, put some band aids on him and give him some medicine (which they eat themselves!)

To make:
Amber added a laminated Doctor Kit tag, cut the ace bandage in half (way too long for just one) and glued the ends with hot glue or Elmer’s glue so they don’t fray.
Cut the felt in half, perfect size for a medium to small stuffed animal or doll to lay on for a travel doctor bed, and there were 40 colored band aids in the one box so she split it in half for 20 for each bag.

If you don’t have two kids, divide everything and save the extra for replacements!

Thanks for sharing, Amber!