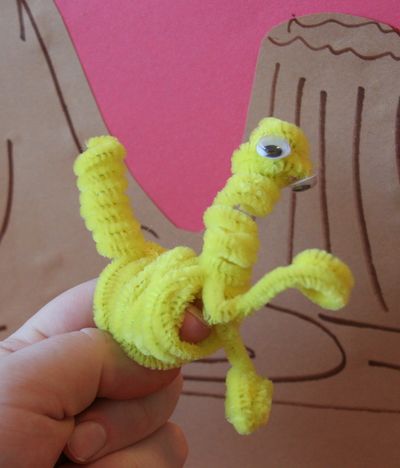 Does anyone else have a bag or two of dollar store pipecleaners on hand just in case? I love pipecleaners. They’re so versatile, cheap, and they come in tons of colors. They’re great for open-ended kid activities because they allow kids to be creative. 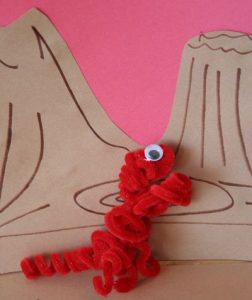 My three year-old son is just starting to discover dinosaurs (his favorite: the T-Rex. How do boys learn this stuff? Is it just part of their DNA?), so we decided to make dinosaur toys out of pipecleaners, inspired by a Family Fun magazine activity. The Family Fun version is a brontosaurus (brachiosaurus?)-type dino with legs, and a long neck and tail. When we tried to make a dinosaur using their instructions, it wasn’t very stable, so I thought I would reinterpret the activity into my favorite type of toy: a finger puppet! [check my blog over at Make & Takes today for the companion red T-Rex instructions]

This is a great make-anytime activity that you can do with minimal preparation. Pull this one out next time your kid says she’s bored, or on a rainy day.

Total cost: Free and up

Ages: 3 and up. Your 3 year-old will need help, but will probably really enjoy the end result! She’ll like to coil pipecleaners around a pen, so be sure to let her do it along with you as you make one. Also, pipecleaners are easy to bend, so these toys won’t last for long with younger kids, but it’s still a fun activity.