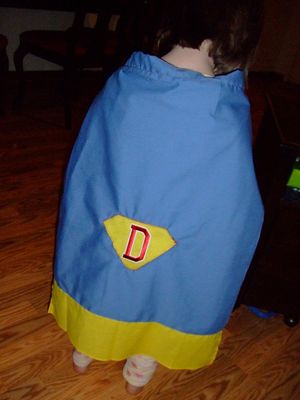 Bandanna Cape by Lauren at Us Wheelers: $3

Lauren used bandannas to make quick capes for her kiddos:

I made superhero capes out of bandannas and an iron-on letter (all from Hobby Lobby).  I used one bandanna (the blue) and cut off about 4 1/2 inches of another bandanna (the yellow one).  I sewed the yellow onto the bottom of the blue (making sure the finished edge of the bandanna was on the bottom.  That’s the beauty of using bandannas: all the edges are finished and you don’t have as much sewing to do.).

On the top of the cape (the top of the blue) I folded under about an inch and sewed a “tube”.  Once sewn, I found some red ribbon in my stash and trimmed it to about 3 feet long.  I put a safety pin in one end and threaded it through the casing at the top of the cape.  Then I made two seams across the casing (securing the ribbon) about 1/3 of the way in on each side.

I traced a Superman emblem from a picture that I printed off the computer and used it as a pattern, cutting from the rest of the yellow bandanna.  Then I ironed on a red letter (the first letter of the child’s name) to the yellow emblem.  I centered the emblem onto the blue bandanna and then did a simple zigzag stitch around it to secure it.  I’ve also serged the edges on other capes (which I think looks better).  After that, you’re done!  Tie around the child’s neck and let them fly away! 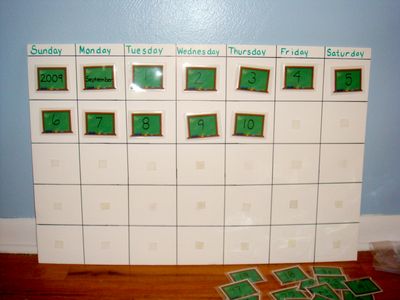 Perpetual Learning Calendar by Linda: $2 and up

Reader Linda C. sent this project in; a perpetual calendar to help her daughter learn days, months, dates, and year:

I purchased a foam board from Michael’s (on sale for $1.50) and the bought small tags from our dollar store ($1 for a pack of 24). On the tags, I wrote all the numbers for the calendar, the months of the year, and the current and next year.  A friend of mine has a laminator, so I was able to protect them a bit from wear and tear, but if you find tags that are sturdy enough, you may not need to do that step. I divided the board into enough large squares to accommodate the tags with the numbers, and at the top made smaller spaces where I hand wrote the days of the week. I purchased velcro from the craft store (I cannot remember the price, but you don’t need very much for this project, so a small package will do nicely) and then adhered a small piece on each large square and the matching piece on each number.