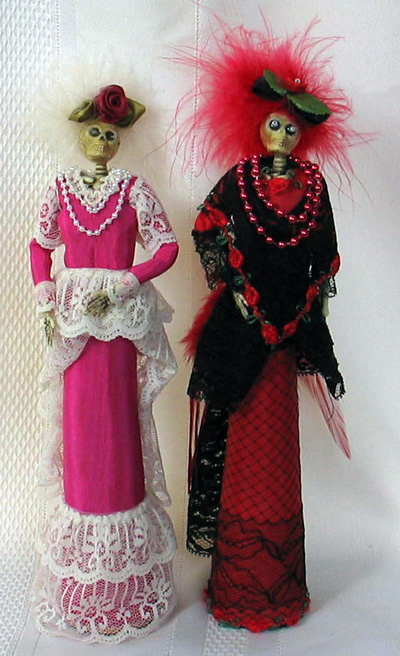 I found these “La Catrina” skeleton art dolls at Perpetualplum – she does a lot of great art with recycled materials. The skeletons in these dolls are from dollar store garlands. The bodies were made from recycled table legs, and the clothing and other adornments are repurposed materials of other sorts. I wasn’t previously familiar with La Catrina dolls, but they are based on a 1913 etching by Mexican printmaker Jose Guadalupe Posada, and have become a popular motif in celebrations of Day of the Dead. [link to Perpetualplum’s blog]

From Wikipedia:
The word catrina is the feminine form of the word catrín, which means “elegant“. The figure, depicted in an ornate hat fashionable at the time, is intended to show that the rich and fashionable, despite their pretensions to importance, are just as susceptible to death as anyone else is.