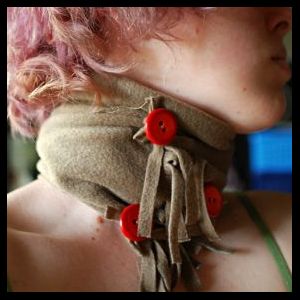 Thanks to my friend Lee, one of my top five most inspirational crafty peeps, who wrote this awesome tutorial, as well as last week’s No-Sew Buttoned Scarflet Tutorial. You don’t have to do any sewing (well, you do need to sew buttons on with a needle and thread, but anyone can do that — no experience required!) Check back next week for another no-sew scarf project by Lee! – Heather

Pick up a fringed scarf at the dollar store, and with some quick modifications, you can transform it into a stylish new cowl to keep your neck warm. Don’t worry, for this project, there’s no cutting involved and no machine sewing. And if you’re the undecided type of crafter, you can change your mind after this one is done; to return this scarf to normal scarf mode,  snip the buttons off, untie some knots, and have an unharmed scarf.

This style has the scarf wrapping around your neck as many times as needed for the two ends to just touch, making for a fitted cowl. Make sure your scarf is a good length for this—wrap it around your neck with the two ends meeting in front (so there will be some twisting in the back), and make sure it’s fitted but not too tight. (My scarf here measures about 4.5 feet by 6 inches.)

To make this version, simply tie three pairs of fringe strands so they’re knotted at the tips to make loops, two on one end of the scarf and one on the other end. On the first side, tie the two endmost fringe strands to each other on each end so you have two loops on the two scarf corners. On the other side, find the centermost pair of fringe strands and tie them together.

Sew on buttons opposite the loops, as seen in the photo above. For this one, I used large sew-through buttons. As in the first version, make sure your buttons are not too small for the loops to hold on to. Then try on your new accessory—wrap it around your neck, position the two ends on top in the front (or a little off-center), and button it up!