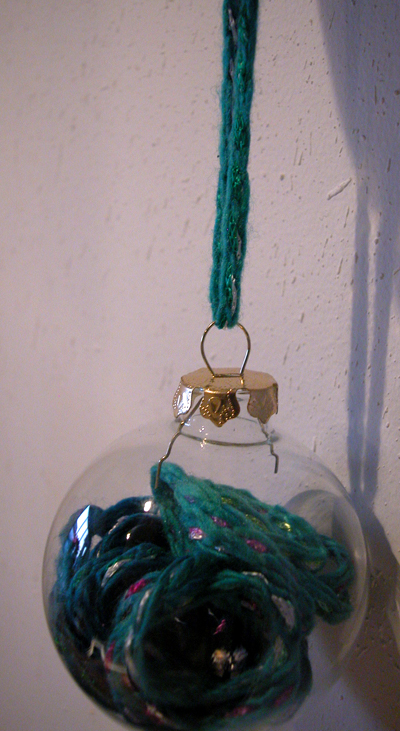 I’ve seen this yarn-filled glass bulb project around, but I can’t remember where I saw it a couple years ago. I was so inspired by that post author (whoever you are!) that at the time, I got three boxes of these glass ornaments with which to make this craft. I was kidding myself because I was 9 months pregnant, it was Christmas time, and we were moving on December 26th… so I didn’t get around to making these ornaments until a year later!

The idea I saw centered around putting yarn from your stash into the glass bulbs. I love this idea because I have some pretty novelty yarn that I bought randomly with no projects in mind (like the Noro shown in the bulb above), that just don’t suit my crochet/knitting style.

I also used a length of the same yarn to hang the bulb with, showcasing the yarn another way, which is a pretty cool twist, I think!

You can get clear glass bulbs at your local craft store. They usually run $1 each or less, depending on size and sales. 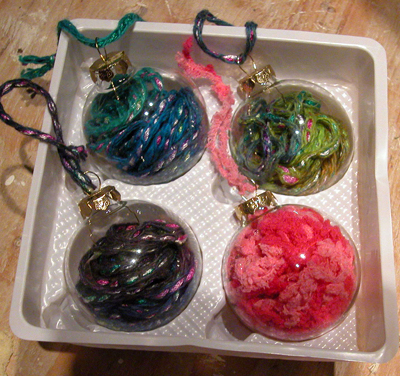 To make them: I either fed the yarn through the hole in the bulb slowly (to create the coiling/balling effect), or I had a big mass of the yarn and shoved it through the hole with a pen (this method used for the pink ornament). 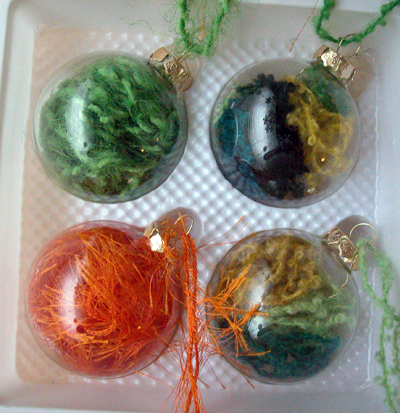 These are hard to take good photos of if you’re in a hurry (as I always am), so I hope you will get the idea! I like the orange eyelash yarn – it looks like fire in a bulb in real life! 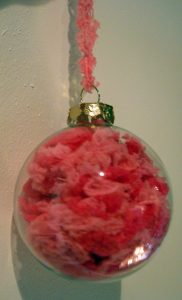 p.s. If you know where I saw this project posted in 2007 (I think it was linked to on a pretty big blog), let me know and I’ll link to it!