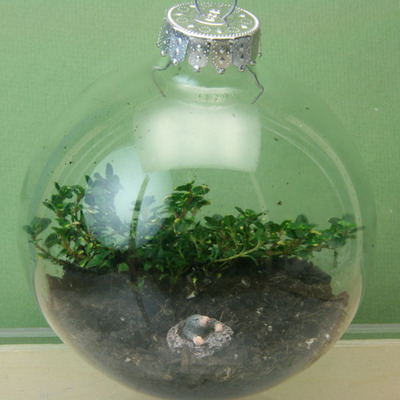 So I had this idea a few months ago to create a terrarium in a glass ornament bulb and give it for holiday gifts. Well, being an ideas person, I have ten-hundred ideas at any given time, and usually only half the supplies I need to make them happen, and one-third the time I need to get them done. As I was researching terrariums, I came across this excellent tutorial on About.com’s minatures page that told me exactly how to make terrariums in glass ornament bulbs. The tutorial was so excellent, that I thought I would just refer you to it instead of creating a sub-par tutorial myself. The tutorial and the photo are by Lesley Shepherd, the miniatures guide. [so go check out how to make a terrarium in a glass bulb]

Oh! And this could be a great project for those liquid marbles we’ve been talking about in another post.

Side project idea: How about making a faux terrarium in a bulb? You could use all kinds of different stuff you have on hand, and either get faux greenery to “plant” or what about making some wee little felt or wool felted plants to put in the bulb? If I were going to make one from my stash right now, I’d get some brown wool roving or brown scrap fabric, shredded, for the dirt part, and then I’d glue a teeny little fake plant in the middle of it all. Add a mushroom, maybe? Hmm, so many options. What would you do?

It’s hard to estimate a cost on one of these babies. I know the glass ornaments are about $1 at craft stores (possibly less if you get a sale or have a coupon), but the rest of it will likely cost more than a dollar upon initial investment, but you will use much less of it than a dollar’s worth per bulb. So, I called it four bucks. Your experience may vary!

I think this is such a cool idea, so please link me/send a photo if you do it! I totally want to make this one, either the real version or the faux version!