Thanks to our guest-blogger Jessica from mad in crafts, who is a great dollar store crafter! She also contributed the customized travel mug tutorial a couple weeks ago. She has tons of ideas so check her out! -Heather 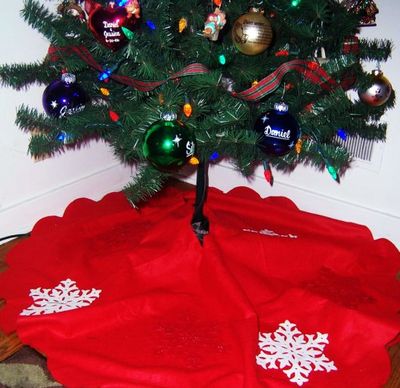 I was so sick of having to drape an old quilt under my Christmas tree that I finally broke down and made a tree skirt.  Okay, the quilt was just an excuse for another project, but I’ll never admit it.

To make a snowy tree skirt, you will need:

I actually got my tree skirt from Target and it cost me $5 which I thought was a good price until I visited the Dollar Tree and saw that they had red felt tree skirts in stock.  Grrr.

Lay your tree skirt out on the floor (or a craft table if you’re spoiled) and pin the felt snowflakes where you would like them.  Be careful, friends, that felt is thick. I wouldn’t want you to get frustrated because it’s 11 at night and the pin won’t go through the felt and so you push extra hard and end up stabbing yourself violently in the finger.  Not that I know from experience; I’m just saying. 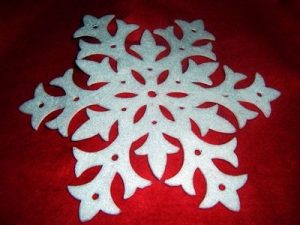 You will only need a few stitches to attach the snowflakes to the felt.  I put a few stitches around the center of each flake and at the tip of each point.  I used white thread for both the red and white snowflakes.  I really like the contrasting thread on the red flakes, and I kind of wish I would have used red thread on the white ones.  Maybe you should learn from my mistakes. 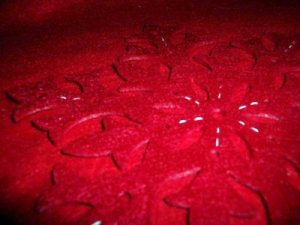 If you want a little more Christmas flair you can spruce the skirt up in a variety of ways.  What I would really have liked to do was to chop up some fluffy white dollar store teddy bears and trim the edges of the skirt with their fur. You know, because the holidays are a time for peace, love, and stuffed animal massacres.  :P  That trim would look really cute, but my dog would have turned gnawing off every inch of fur into his personal New’s Years Resolution.

Drape the skirt around your trimmed tree and top with thoughtful presents.  All wrapped in paper from the dollar store, of course. 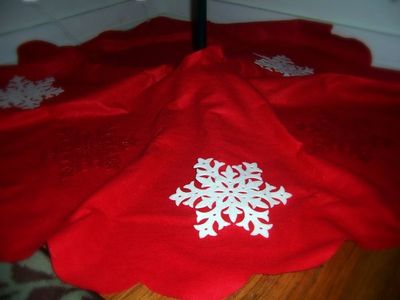