Some of you may have been following the drama that unfolded surrounding the Wreath Week Handmade Wreath contest’s final voting round. Yes, it was as dramatic and exciting a conclusion as the presidential election of 2000 (oh my, was that nine years ago??)!

As I mentioned before, holding a contest at Dollar Store Crafts was new to me, and things were done kind of on the fly. That included installing a polls plugin to tabulate your votes for a winning wreath. I scheduled the poll to close at midnight on Thursday December 17th (actually 23:59 and 59 seconds!), and apparently the poll didn’t close until 8:25 am this morning! Well, website time is apparently a very complicated thing, and I naively assumed that if I scheduled my poll to end at midnight, well, it would end at midnight!

A strange thing happened between midnight and 8am: the winner of the contest appeared to shift, as votes that were cast after the deadline changed the result.

So, I looked at the voting logs and eliminated all votes cast after the time cut off of 11:59:59 on Thursday night, Pacific Time.

Here are the results of that:

So, congratulations to Wreath 10 winner, Sarah from Nicholas and Sarah, with the Gumdrop Wreath (Wreath #10). 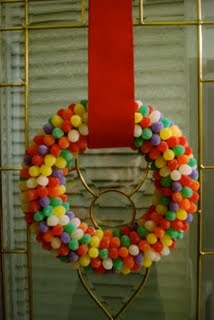 I would also like to congratulate Georgette, who came in a very close second with the Red Poinsettia Wreath. I am going to award her a $25 gift certificate to BelaKoi Designs’ Etsy shop for her efforts. 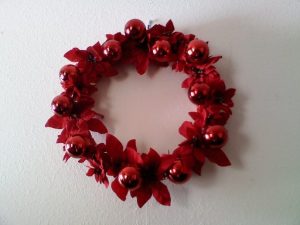 I’ll feature both of these wreaths with the good old Dollar Store Crafts treatment next week!

Thanks again to everyone who voted and participated!