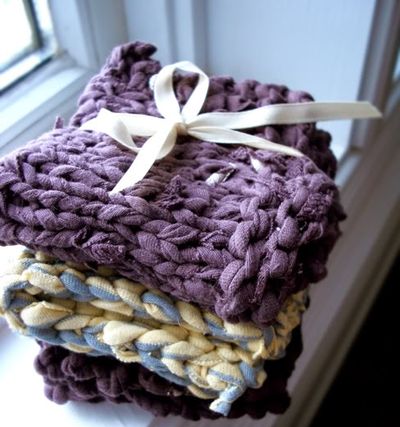 Craftster user robotdinosaur snagged one of the Craftster Best of 2009 with this cool repurposing project. She shredded some of her unwanted t-shirts into yarn and then knitted them into these cool dishcloths. This is such a pretty thing to do with your old tees, and it makes the best-looking knitted dishcloths I’ve seen. [click here for the t-shirt dishcloth project]

She didn’t post a knitting pattern for them, but I’m pretty sure it’s a very basic knit square. If you need a pattern, you can google “knit dishcloth pattern” or check this page for a bunch of free patterns. You can also crochet these, but if you’re a crocheter, you already know that! If you don’t knit or crochet, how about sewing two or three layers of t-shirt together in squares to make dishcloths? That could be really cool!

T-shirt yarn: Apparently some evil company is harassing all the crafters who post tutorials about making t-shirt yarn (usually when they post tutes about making t-shirt yarn necklaces), and consequently every time I link to how-to instructions, they get removed. Well, first of all I want to say that whoever that evil company is, it’s a simple process and although you may have filed a patent on it, I really don’t think you should be able to patent the process of cutting jersey into strips and stretching it until it coils into a tube. Oops, did I just give away your trade secret? 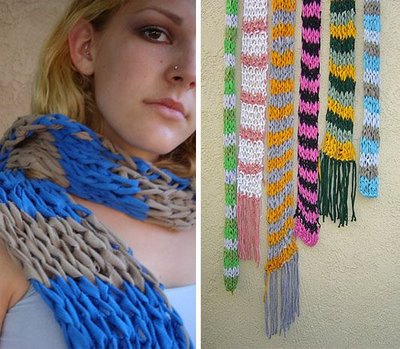 p.s. Bonus project for your t-shirt yarn: How about knitting one of these fab scarves? I love the two-color stripes! Project found at Design Vagabond.