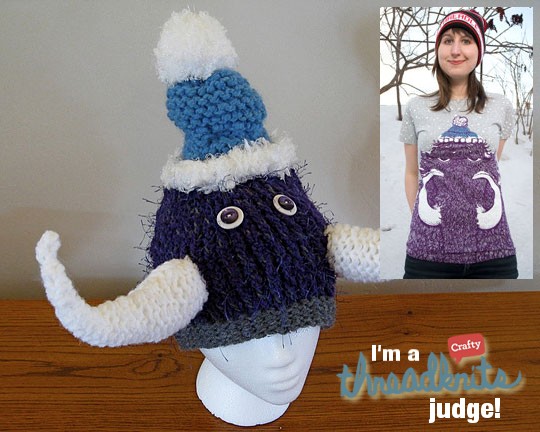 I was invited to be a judge by the folks at Threadknits, a knitting/crocheting competition sponsored by Threadless.com. I’m so honored and excited to be involved, and I think it would be awesome if a Dollar Store Crafter (YOU!) won the contest, so enter! I’m not saying I’ll vote for you just because you’re a DSC’er, but it couldn’t hurt! You’re all so creative, I’m sure you will come up with some amazing entries. If the contest isn’t for you, but you know someone who’s a knitter or crocheter, let ’em know about it. They could win prizes!

About the Contest: Using knitting or crochet, create an original item inspired by a Threadless.com t-shirt. You can make whatever you want (potholders, sweater, stuffed animal, etc.), and you’ll be judged on creativity, execution, and general aesthetic. You have until Monday, March 1, 2010 to enter.

Check the Threadknits site for more info and rules. I hope to see your creations!