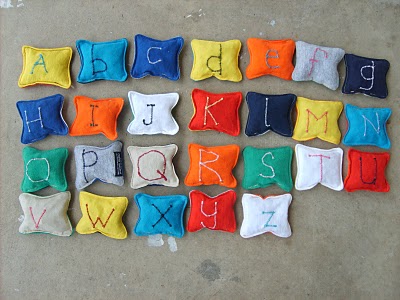 I love this use for old t-shirts: Alphabet beanbags by Katie at Notes from a very red kitchen. They’re so fun and colorful, and by far my favorite thing about them is that there’s an uppercase letter on one side, and the corresponding lowercase letter on the other side! My sons would love these. I also really like the photo of all the alphabet squares in a row – would be fun for a quilt! [click here for the alphabet bean bag tutorial]