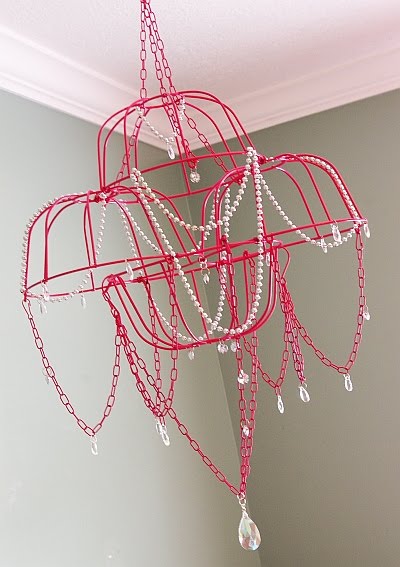 Chandeliers are in the air! The day of the dollar store chandelier is nigh, and the creative frugal masses have risen and said “We want chandeliers, and we want them CHEAP!” When dollar store crafters want to make something, they find a way to do it inexpensively. Around the same time I had my dollar store hanging-basket-into-chandelier epiphany, Megan at Brassy Apple used some of the dollar store hanging baskets to form a pretty chandelier for her daughter’s room. Yes, it’s true! Great minds were thinking alike. Megan’s chandelier is nothing short of fabulous — she combined several hanging baskets to form one big chandelier, used the chain link in the baskets as an element of her design, and even used mardi gras beads. And no, neither of us knew the other person was working on this project. I estimate there are a dozen or so other intrepid cheapsters out there discovering this technique as I type. We are so creative! [find out how to make a blingy chandelier here]

I was at a certain big-box craft store the other day, and I noticed they sell packages of faux chandelier crystals in the vase-filling stuff department (you know, where the glass marbles and seashells are). The package had about 40 crystals for $6, so that’s a great inexpensive alternative if you want to add bling to a chandelier but you don’t have any crystals on hand. Sometimes the dollar store has the same acrylic crystals, but I haven’t seen them around lately.

p.s. please comment with your links if you have made a cheapster chandelier, too!