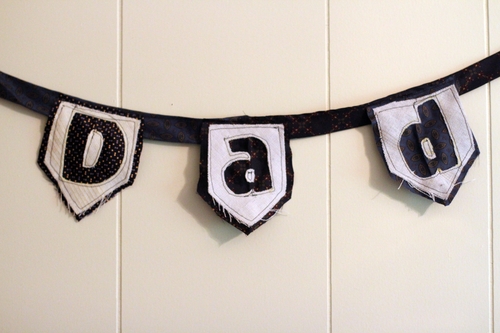 I don’t know about you, but I have such a hard time coming up with good handmade gifts (or any gifts, really) for the men in my life. Father’s Day is always a stumper for me, but the other day, I found a bag of old thrift store ties I used for another project last year, so I just sat down and played with them. I came up with this reverse-applique tie banner that would make a cute decoration for Father’s Day brunch. Even if Dad doesn’t appreciate handmade stuff, he can at least appreciate that his name is on the decorations! (And maybe the Dad in your life is the type who would really dig this!)

I think this would also make a fun masculine happy birthday banner, or personalized banner with your favorite guy’s name on it.

It might look like I used the bottoms of three ties, and you can definitely do that. I didn’t have any of the tie bottoms anymore (I used them in that previous project!) Instead, I deconstructed the ties and used the stiff loose-weave inserts (the white fabric), sewed them to an unfolded piece of the tie, and cut out around them to suggest the tie. I sewed the skinny ends of two ties together to make the string part of the bunting. 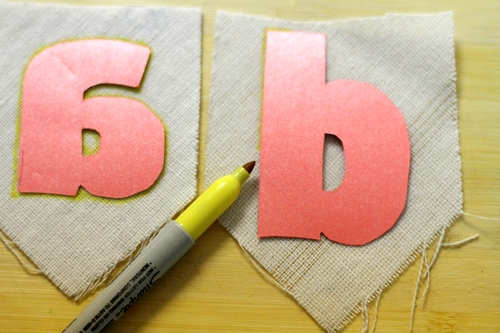 Print letters on cardstock, and cut out with X-acto knife. (I used my wooden cutting board for the cutting surface.)

Cut bottom of ties off, about five inches from bottom. Use letters to measure, and make sure you are leaving enough fabric (the letters should not hang out over any edge of the tie).

Remove the stiff inserts from the bottom of the ties. Save the rest of the ties for later. (Alternately: Keep the inserts inside the tie, and cut out three tie-shaped pieces out of white fabric).

Transferring letters: use your disappearing ink marker to trace the letters on the front of the white fabric. (In the photo, I was tracing the letters backward on the back of the fabric with a Sharpie… this didn’t work, so don’t try it!) 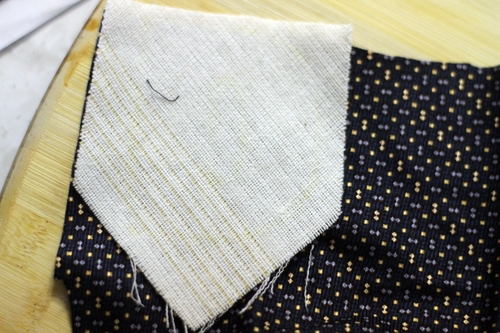 Tie fabric: Open up tie fabric, pin tie insert to right side of fabric, and cut out around tie insert shapes, leaving about 1/2″ extra fabric around the edges. 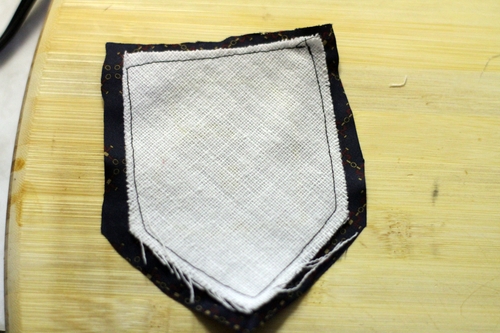 Sew around white fabric to secure it to tie fabric. 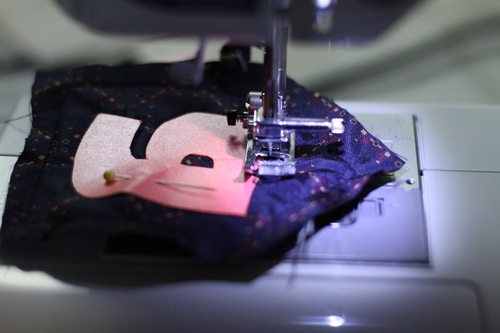 Sew around the letter: If you have transferred letter outline to white fabric, stitch around the outline with your sewing machine and a straight stitch (or with a running stitch, if you are sewing by hand). I couldn’t find my transfer pen, so I pinned the letter, backward, to the back of my fabric and stitched it from underneath. There’s no reason why you shouldn’t just pin it to the front and stitch it that way, so I’m not sure why I did it from the back. Sometimes your mind is just fixed on a specific way to do things! 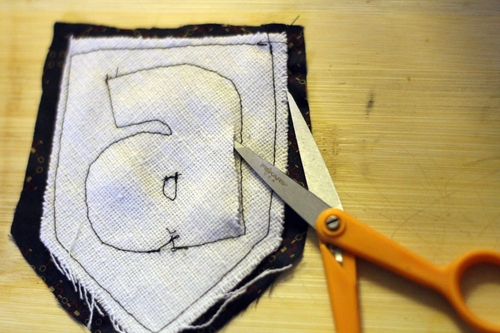 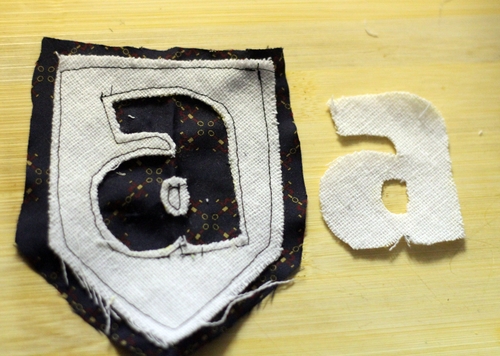 Keep your letters: Try to keep the cut-out letter intact so you can use it on another project. (Tomorrow, I’ll post about what to do with your saved cut-out letters.) Don’t forget to carefully cut around the hole in the middle of the letter.

Make the garland: To make the part you hang the letters from, take two skinny ends of your ties, and cut them about 18″ from their ends. After you cut the first tie, match up the second tie to make sure the place where you cut it is about the same width and they match up well. I cut mine on the diagonal. (Alternately: use anything else for the garland part, like a ribbon, strip of fabric, or whatever you have on hand.)

Sew the two ends together: I straight-stitched  them together and then zig-zagged the raw ends. 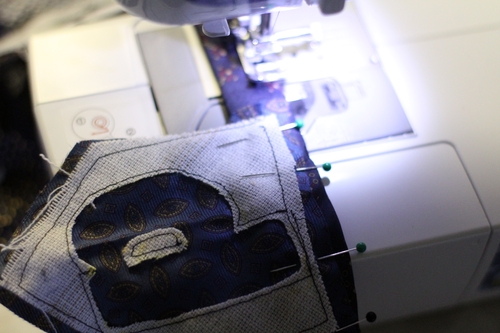 Attach letters to garland: Pin letters onto the garland, centered and equally distant from each other. Sew a straight stitch across the top of each letter flag. 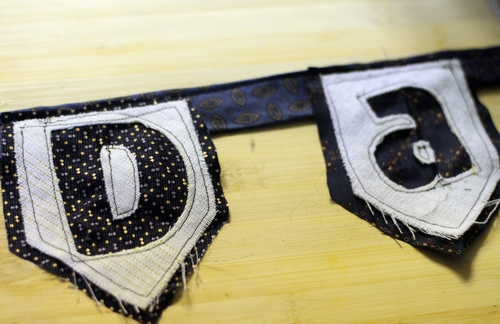 Don’t forget, I have another project for you to do with your leftovers, so check back tomorrow.