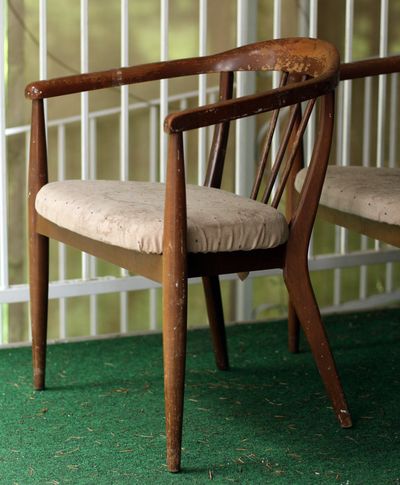 I just wanted to show you my little before and after chair makeover project. This isn’t dollar store-y, but I did stashbust for this project! We got these two chairs (cute midcentury mod!) when we moved into our last house; the previous occupant left them (and a few other pieces of furniture). They had already been recovered with some unattractive beige fabric (probably in the 1980s – the fabric has the telltale country blue and dusty rose accents). 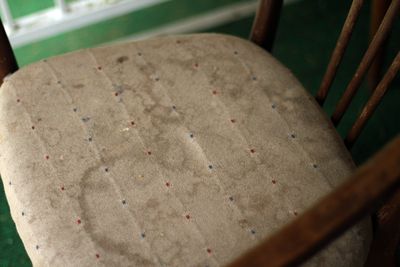 These are the go-to chairs for my preschool sons, who sit on them when they paint, play with playdough, and stand on them when they help me cook in the kitchen. I’m sorry to say our contribution to the ugly beige covers are all those stains! Ick! (Sorry if this photo made you lose your appetite, or your respect for me!) The seat covers were ugly, and ruined, and the finish was chipping off. 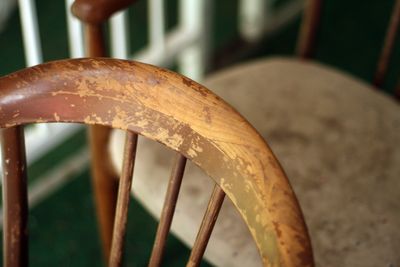 You’ll probably agree with me that these chairs (1960s, you think?) have seen better days. I like the shape, and I had extra paint left over from a building project I haven’t told you about yet, so I decided to paint them and recover the seats. I’ve heard it’s pretty simple, so I wanted to find out just HOW simple! 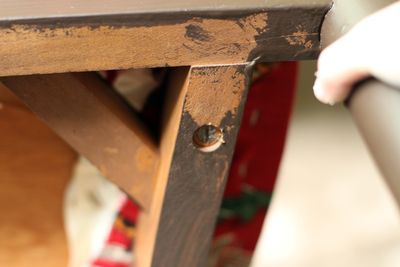 I’m sorry I didn’t take process photos because I didn’t intend to write a tutorial. I’ll describe how I did it, and there are so many chair-recovering tutorials floating around out there. And really, this is a good jump-in-and-figure-it-out project. Every chair is different, but you will probably need some of the same things for your project:

Total cost: FREE because I used stuff I already had on hand! 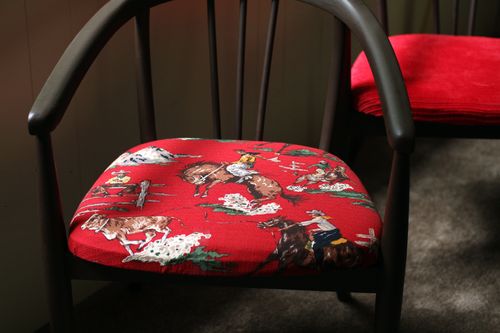 I used stash fabric to recover my seats. I originally wanted to use some Pendleton wool blanket off-cuts I had, but they had been attacked by mice in the garage, and weren’t in useable condition. I then found some sturdy cowboy print fabric that happened to match the paint (total happy accident). I only had enough of the cowboy fabric to do one seat, but I found some red corduroy that compliments the cowboy fabric. Happy accident #2. (Oh, and on my computer, these look rooster red, but they’re darker than that!)

Cheapster tip: Corduroy looks a lot like velvet, but it’s a lot cheaper and wears better.

When I flipped the seats over after stapling them, I couldn’t believe how great they looked! It made me wonder what took me so long to tackle this project. I loved the fabric, and it stretched right over the seats. I was afraid it would end up being saggy, or not straight (especially for the corduroy, since there’s a distinct line running across the seat with that fabric). 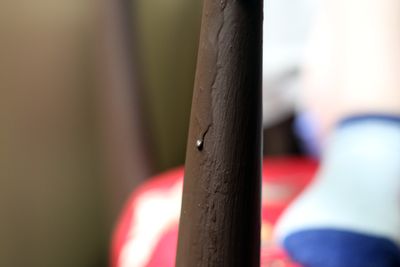 I didn’t do any of the prep I should have (mostly sanding), although I did wash them to remove the built-up kiddie paint and playdough! Since these are workhorse chairs for us, I just jumped in and started painting. My almost-4 year-old son helped me paint the chairs dark brown. He took charge of one chair, and I took charge of the other. He did a pretty good job of covering his chair (lots of excess drips–ha ha!), and I did an okay job of covering mine. I went over his chair when he was done painting, but apparently I missed a drip or two! Oops! You can’t tell if you aren’t looking closely.

We did two coats of paint, and I decided to just leave it at that because I needed to get the project finished, so I reattached the seats (with the aforementioned four screws), and then they were done! 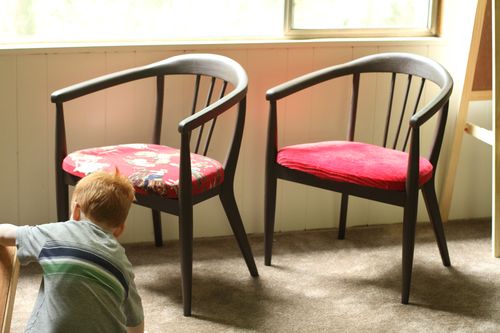 I’m so happy with them! They turned out better than I imagined. I know they’ll probably show wear sooner rather than later because of the slapdash painting job, but now that I know how easy it is to transform chairs, I won’t mind redoing them when the time comes. This was such a fun project with great results! I will definitely be on the lookout for old nasty chairs with potential now. 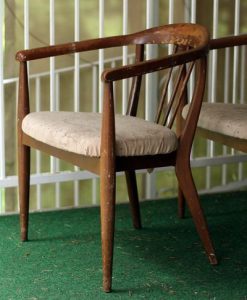 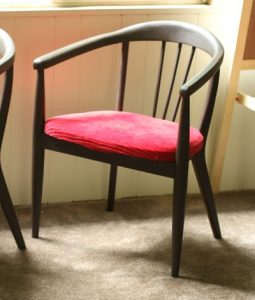 I know this is like kindergarten to you veteran furniture make-over-ers, but this is new to me! And, I did it all myself!