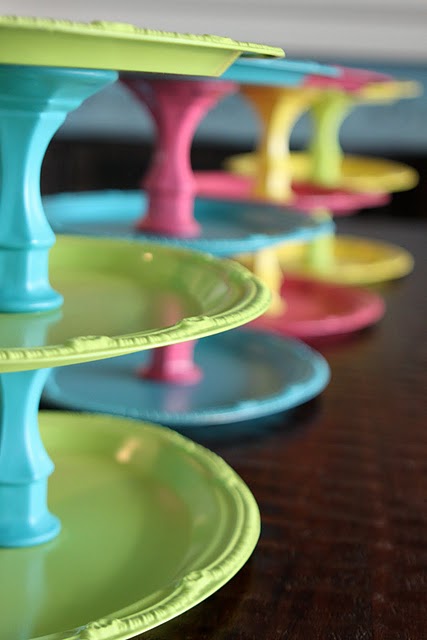 Tiered trays are a top 10 dollar store craft. What does that mean? That you love to make tiered trays, and I’ve seen a LOT of tiered tray projects, and have even featured a couple of them. That said, you have to make an awfully special tiered tray to capture my attention, which is precisely what Julie at Joy’s Hope did in her Dollar Store Craft entry at the CSI project. How did she twist this popular project? By choosing a fabulous color palette and painting her trays and pedestals with bright colors that really pop! Also, the fact that she made several tiered trays adds to their impact. [how to make brightly colored tiered trays]

Not only are Julie’s trays colorful, but you will crack up at her colorful tutorial. Hi-larious. And I quote: “The Valspar is my new boyfriend.” Oh, also, Julie reminds us that the trays are not food safe or dishwasher safe, so be sure to use cupcake liners, doilies, or scrapbook papers underneath anything edible you place on the tray.

Use these for parties, organization, weddings, showers, or whatever else you can think of!