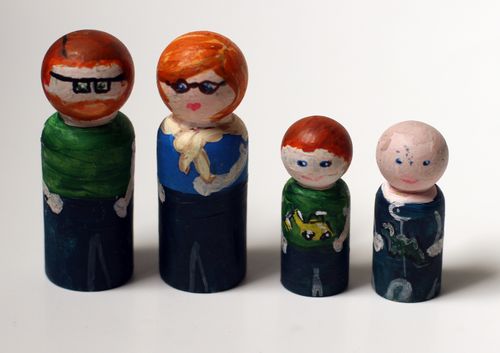 I’ve posted about peg dolls before, and I finally made the set I’ve been wanting to make for over a year!  I wrote up a tutorial about it for Skip to My Lou‘s Craft Camp: How to Make a Peg Doll Family. You can get these wooden pegs at your local craft store (in the woodworking section), or you can use old fashioned wooden clothespins from the dollar store. You can use the clothespins as-is (I have seen some very cute peg dolls made out of clothespins), or you could even try sawing them off if you like the look of the pegs, but you want to save a few bucks. [click here for peg doll family instructions]

I had a lot of fun making this peg doll family, but a couple things surprised me while I was making it. One, it takes longer to paint them than I thought it would. It took at least an hour or maybe two to make the whole family. Two, my kids were completely captivated by tiny pegs that looked like them. If you have kids, you know they usually categorize things corresponding to family members anyway. My sons were very amused by clothes they could recognize on the teeny peg dolls. My two year-old son played with “the family” for about an hour. It was so cute to hear him talking to his own little peg (“Where you going, Evander?”)

Check out Skip to My Lou‘s Craft Camp, featuring such genius crafters as:

Cathe Holden from Just Something I Made:
Kid Self Portraits

Marie LeBaron from Make and Takes:
Building With Marshmallows

and many other talented crafters! Sorry I couldn’t link to them all here, but you can check out Craft Camp for a full lineup.