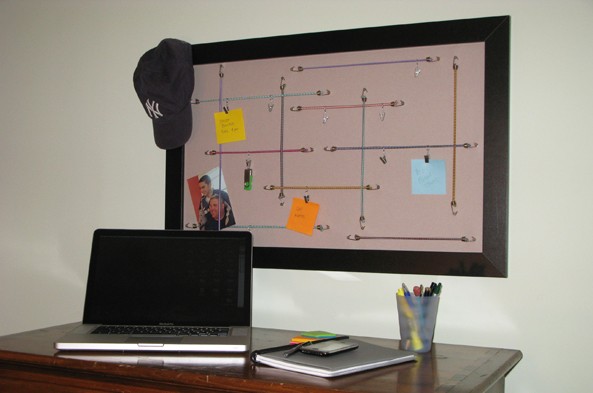 Here’s a cool update on the French memo board idea! This version uses mini bungee cords to create the gridwork that keeps your keepsakes and notes up on a board. This is a great idea for a more masculine (or neutral) office space, or a dorm room or boy bedroom. I like the circuit-board look of the bungee cords! If your budget is really low, you can skip the board and use the bungees directly on your wall (maybe paint a square on the wall a different color for a faux board). Great idea by DIY Life [make a bungee cord memo board] [via]

Mini bungee cords can be found at your local dollar store. You can either build the board from scratch as in the tutorial, or buy a readymade bulletin board at a thrift store or office supply place. I’m substituting a few dollar store items in my estimate here instead of some of the suggestions in the tutorial.