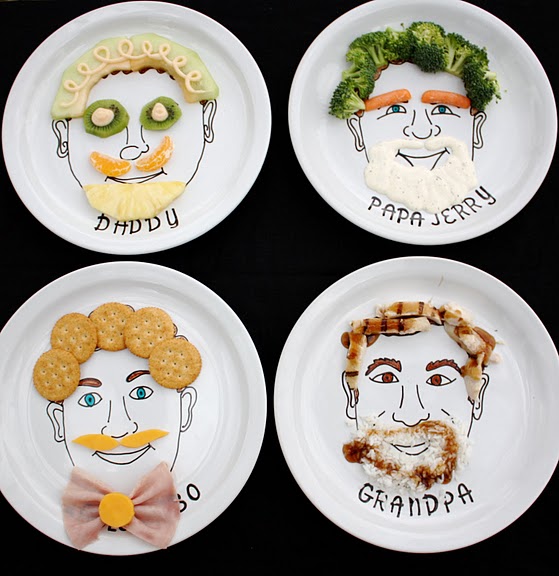 Want to get your kiddos to eat more food at meal time? Serve their veggies on a funny food face plate! I recently made the dollar store version of the Food Face plates (as seen on At Second Street, inspired by the Fred and Friends Food Face

Plate). The idea behind the plates is to decorate the faces with veggies and healthy food, as a way to encourage kiddos to eat. Kalleen’s tutorial on the At Second Street blog shows how to make personalized food face plates by transferring and tracing photos of loved ones onto the plates. [click here for the food face plate tutorial] 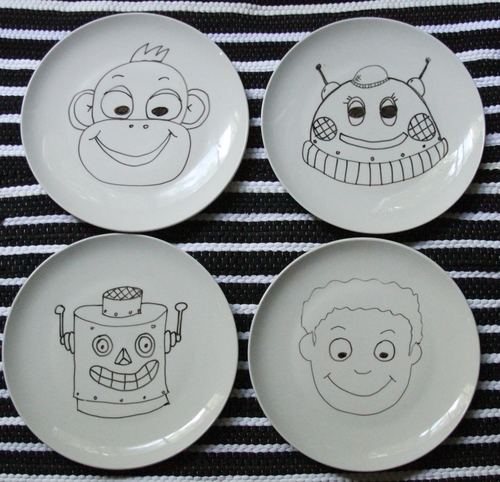 (I forgot to take photos of my plates with food on them!)

For my plates, I just drew funny faces freehand (I sketched them on paper first so I had a plan). You can get plates at the dollar store (which is what I did), but you will need to have a Pebeo Porcelaine marker

, which is made to write on dishes. You then bake the dishes to make the marker permanent. The markers cost a few bucks, but they are a really fabulous tool for dollar store crafting. If set your kiddos loose decorating dollar store dishes with a few of these markers, you’d have all your grandparent gifts for the holidays done in a day! I have used my marker for several projects, and it’s a lot of fun to make custom dishes (especially when you’re only spending a buck per plate, instead of $40 at a personalized pottery place).

The only tip I have for you is to make sure you draw thick enough lines, and you might want to avoid cutlery on these plates. You can wash them in the dishwasher, but I noticed a bit of wear on my drawings when we used forks and knives with the plates. I’m not sure if this is typical, or if it’s just because my lines weren’t very dark. You can also get the Porcelaine paint

, which might go on thicker than the paint markers.