Time to start thinking about Halloween costume-making! I have had costumes on the brain for a month, as I’ve been working on various costume projects. Here’s a question from our facebook page that I wrote a huge long answer to. What do you think? Any advice for Amy, who said: “My son wants to be the sock monkey from the car commercial. Any ideas? No, I don’t want to knit him a full body suit. He is 6’1″.”

In case you need a reference point, the sock monkey in question is here: 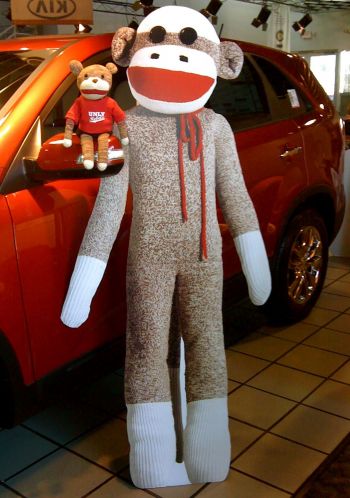 Here’s a head-to-toe photo of the sock monkey (it’s a  cardboard cut-out but you get the idea). Photo from Camp Sock Monkey.

Rhonda said:
If you can find enough thrifted wool sweaters in the right colors, you could felt them, cut them apart, and use them to sew the costume.

Here’s what I think:

Halloween costumes are all about illusion, so this sock monkey costume doesn’t have to look fabulous from up close. That means losing the knitted texture, and just going with the suggestion of sock monkey.

Body: I would buy brown sweats and then use white spray paint or fabric spray paint (like Simply Spray) to make the white arm & leg sections (tape off the line where you want those sections to start to make a clean line between the brown & the white).

Alternately, for a more knitted look, use a pair of white tube socks to make the white arm sections. Cut the socks off at the heel, sew them up, and then pull them over the arms. Take a white knitted sweater from the thrift store and pull sleeves over feet and calves, mark where to cut sleeves off, and add a couple inches. Then cut off, and sew up. Tea dye if you want them to be off-white. If you need to, add elastic around the top of the leg sock things so they’ll stay up.

Embellishments: For the red and black, felt embellishments would probably be cheapest (including for the red stripe on the butt). Attach with hot glue. Make a long red i-cord for the neck tie (or just braid a few strands of red thread).

Head: For the molded head, how about blowing up two punch balloons (get them at the dollar store) and papier-macheing them. When they are dry, cut one to fit onto the other one as a mouth, and glue them together. Then papier-mache over the joined section. Then paint the sock monkey head brown and add felt features and make sure he can see out of it with strategically-placed eyeholes — probably in the monkey’s mouth — painted screen works well for this. Cut a hole in the head where the eyes should go. Glue in screen, and paint over it. I made a Grover mascot in high school, and we used a couple pieces of foam that we carved into a head shape, but I think papier mache would work a lot better!

Glue felt embellishments to the head.

If your son is really committed, buy polyester batting by the yard and wrap his arms, legs, and torso in the batting before he puts on the costume, to create the smooth stuffing illusion.

Time: This project will take you several hours, and you will spend most of your time on the head! Plus, the head will take 1-2 days to dry, so make sure you don’t wait to start on it.

Anyone else have any great ideas?

Update: Emily made a sock monkey for her son a couple years ago. Here’s what she said:

A few years ago, my Kindergarten aged son wanted to be a sock monkey, here is the costume I sewed (I have very basic skills!) I used an old Easter Bunny costume, that was the right size for my son, I used that for the body piece of the costume, and traced it onto newspaper for a pattern.  I forgot to mention the fabric was in the clearance section at my local material store, and I have seen it there often since. 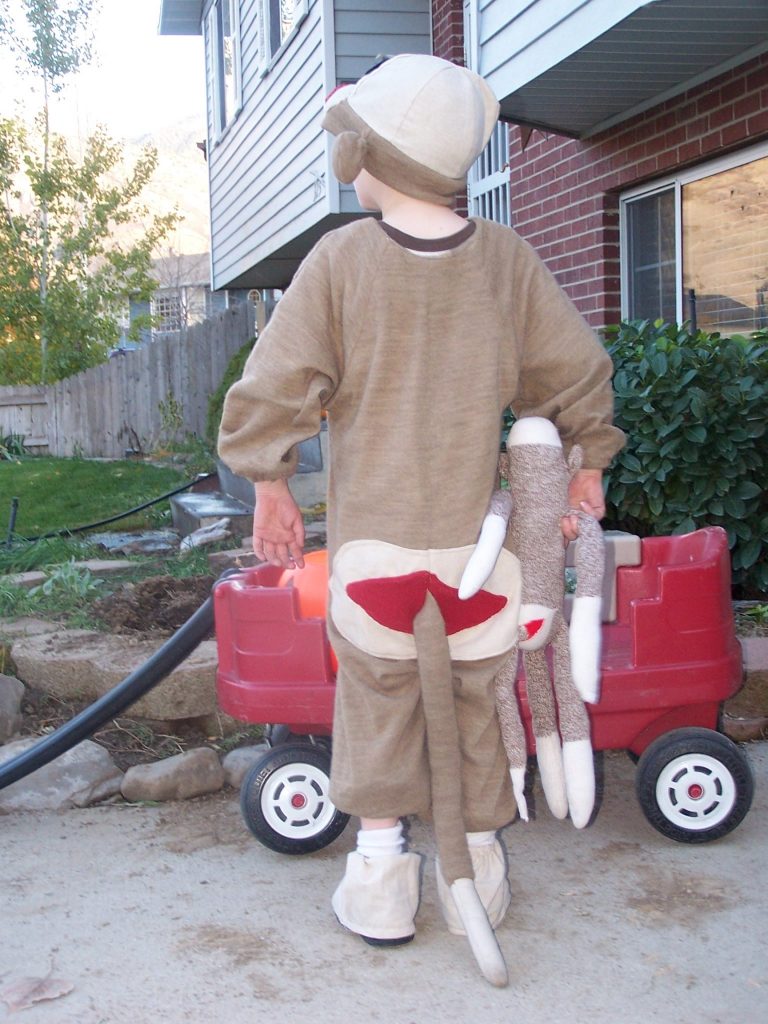 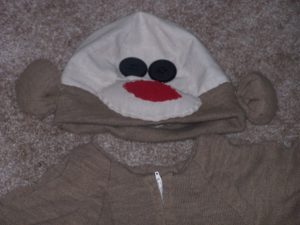