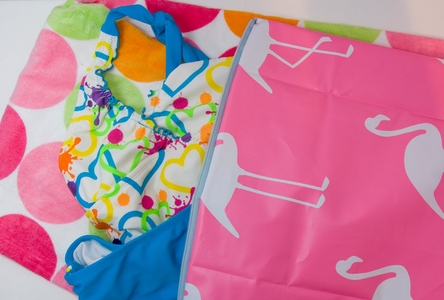 Over at The Polkadot Chair, I found this cute idea: make a zippy pouch for wet stuff out of a shower curtain! This cool flamingo shower curtain was on sale at Target, but if you don’t mind plain, the dollar store has shower curtains, too. Sure, summer is almost over (hello, August!), but wet pouches are useful for lots of other applications. Moms of diaper-wearers, raise your hands! Author Melissa said she likes using shower curtains because they come in cute prints and they offer a lot of yardage at a good price. [how to make a zippy waterproof pouch]

Other ideas for stuff you can make with shower curtains: diaper changing pads, oversized totes for workout, pool or beach, waterproof fitted sheets for a crib. Consider using shower curtain material for any project that would benefit from being waterproof. Don’t forget you can reuse your old shower curtains too. Just toss them in the washer with a teeny bit of bleach and allow them to dry before you cut into them.