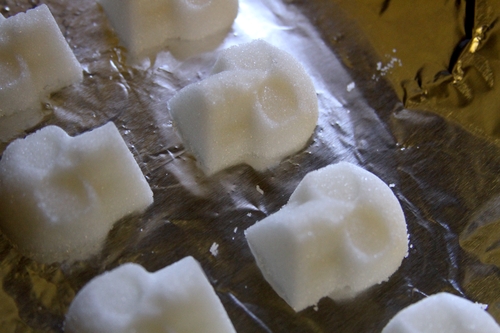 Sugar skulls are a traditional part of the Day of the Dead (aka Dia de los Muertos) decorations and ritual. Usually they’re not made to be eaten, but I found these cool skull ice cube trays at the dollar store, and I thought it would be fun to make edible skull decorations. Making edible skulls is cheap, and so easy even a preschooler can do it. I made a batch of them, and after I was done, my 4 year-old used leftover sugar mixture to make a skull all by himself with no help from me. Check out the video (subscribe), or the written instructions below. 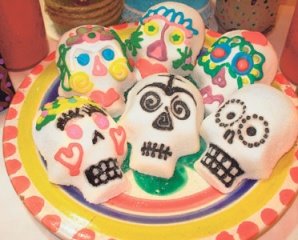 These sugar skulls by Crafty Chica

These differ from traditional skulls because they don’t use egg whites or meringue powder, and therefore are not as hard. Traditional sugar skulls (or “calaveras”) are hollow, decorated in colorful icing, and put out to commemorate the dead. These are firm, like sugar cubes, but you can bite into them. Use these as cupcake toppers, or as a creepy sugar cube to serve with your Halloween or Day of the Dead tea or coffee. Decorate them with royal icing to make them look more like traditional sugar skulls (or use Crafty Chica’s shortcut and use mini tubes of frosting from the grocery store).

This project works with any mold, so think beyond the skulls! 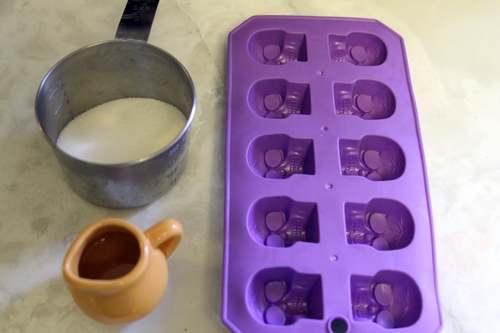 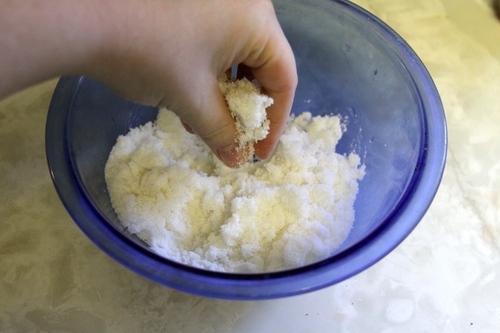 Put 1 cup of granulated white sugar in a mixing bowl. Make an indentation in the middle of the sugar and add 2 teaspoons (yes, the itty bitty ones!) of water to it. Squish the mixture with your fingers for about one minute until completely incorporated. Make sure there are no lumps of dry sugar. When it’s mixed, it should feel like wet sand. 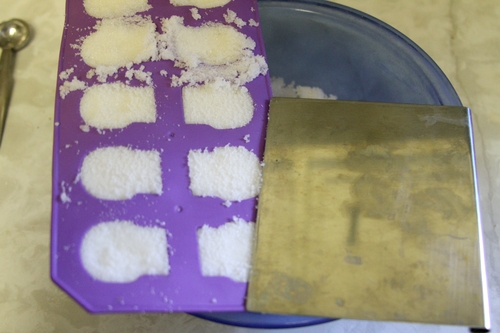 Fill the molds with sugar and pack tightly. Level top off with a flat spatula or scraper. 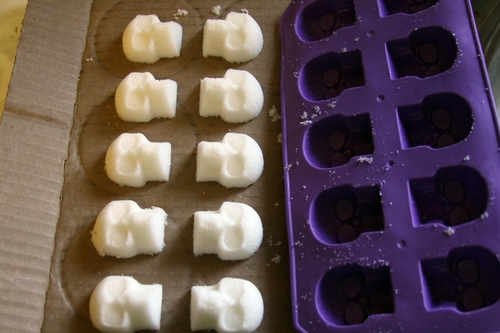 Put a cookie sheet or piece of cardboard on top of the mold, then turn over and unmold the skulls immediately. 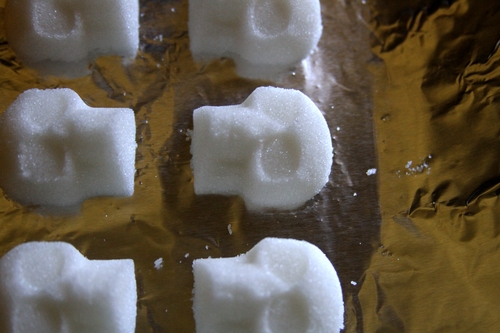 Let the skulls dry 5 hours or overnight, or put them in a 200° F oven for 5-10 minutes to help them dry more quickly. When they’re dry, you can decorate them. Use royal icing, mini tubes of frosting from the grocery store, or colored candy melts to decorate the skulls to resemble the colorful Day of the Dead skulls.