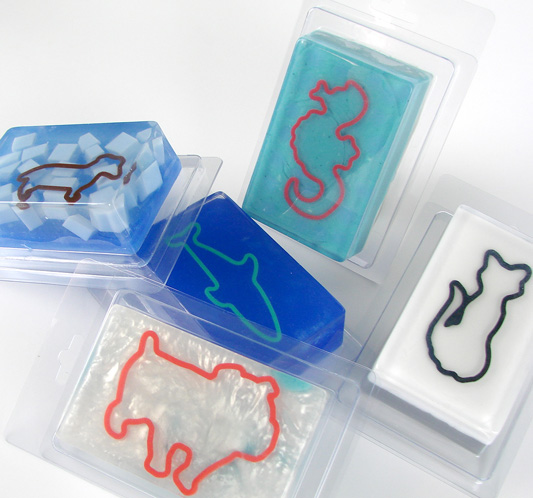 On my last several trips to the dollar store, I’ve seen lots of packages of those trendy shaped rubber bands. I stumbled across this adorable tutorial on The Soap Queen‘s blog, which uses melt and pour soap along with those rubber bands to make a super-cute party favor or gift. [how to make rubber band embedded soap]

You might not remember, but one of my very first tutorials on this site was tattooed soap, which was based on instructions from Soap Queen’s blog. For this project, you can’t get the soap-making stuff at the dollar store, but you can get the rubberbands there, and then get the soap supplies at Soap Queen’s awesome company, Brambleberry. I used to make soap and lip balm, and BB was my favorite source for supplies. If you do this project, the most cost-effective way to do it is to buy the supplies online, rather than in a craft store. Don’t be tempted to use any of the dollar store’s fragrance oils for soapmaking, as they are not safe for skin application.

The up-front financial investment of this project is a bit more, but you will be able to make a few bars of soap for party favors or holiday gifts. Making melt-and-pour soap is super simple – if you can operate a microwave, you can make melt-and-pour soap!