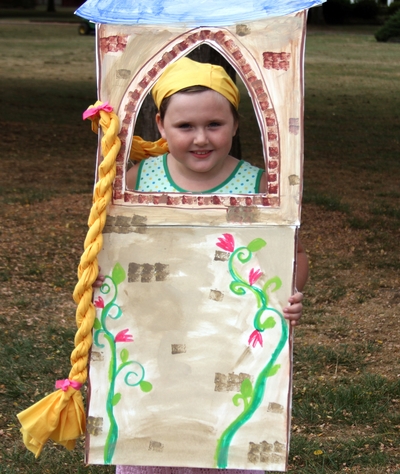 Welcome to day 5 of Homemade Costume Week with our last quick and easy no-sew costume: the Rapunzel costume complete with long braid and tall tower. This Halloween costume is the one in the group that I wasn’t sure I could pull off, but I was excited by the concept and wanted to give it a try. There were two unknown components: the long braid (turned out just like I imagined) and the wearable tower (totally different than I planned). Find out how to make this costume over at my post at Kaboose: [how to make a Rapunzel princess halloween costume] 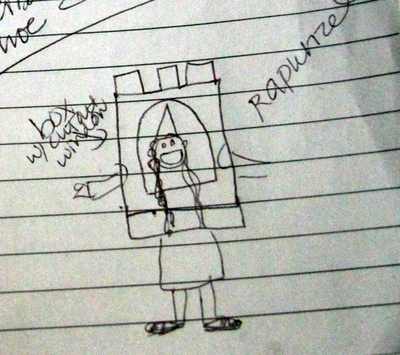 The original concept called for a box with a window cut out in the front, and arm holes in the sides. When I tried it out, the box was awkward and unbalanced on the child and it just didn’t work. I wanted to make sure the costume construction was uncomplicated, so the box idea wasn’t good enough. It could have worked with a tall, narrow box, but those aren’t easy to find and it wasn’t a practical solution.

I ended up using two pieces of foam core board attached sturdily together with yardsticks in the back to brace them together and add enough substance for the child to wear them without being afraid the foam core would disintegrate.

What are your big Halloween costume plans this year?