Dressing as your favorite geeky character is so much fun! Most of the costumes I loved when I stumbled across a Handmade Costume contest online were geeky, so I had to break the geektastic geekery into a few posts. Yes, Halloween is over, but I’m writing a series this week highlighting some of the great handmade costumes I’ve found on various websites.

This first costume was the most impressive costume I saw, and it was made with some dollar store stuff! 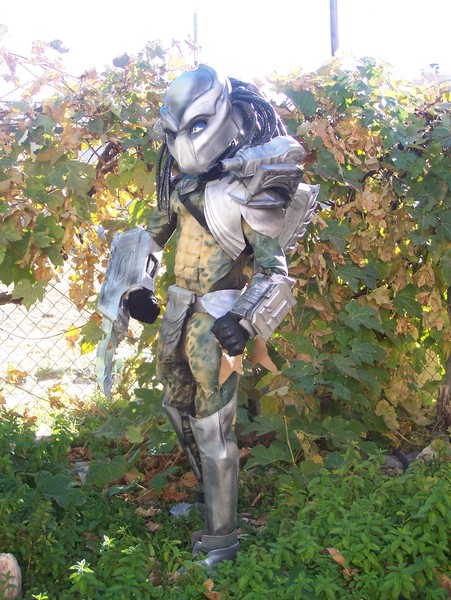 Ward from At The Eastern Door, creator of this costume said: My son wanted to be the “Hunter” from the “Predator” series of movies. This is our rendition. 30 sheets of EVA foam, a quart of contact cement, spray paint, some items from the dollar store, and voila….The Predator

There’s no info on how it was made, and I really can’t begin to guess how it was done (I specialize in simple craft projects, not incredibly complex and amazing ones!)

This next costume is one of the few that made me laugh out loud in delight: 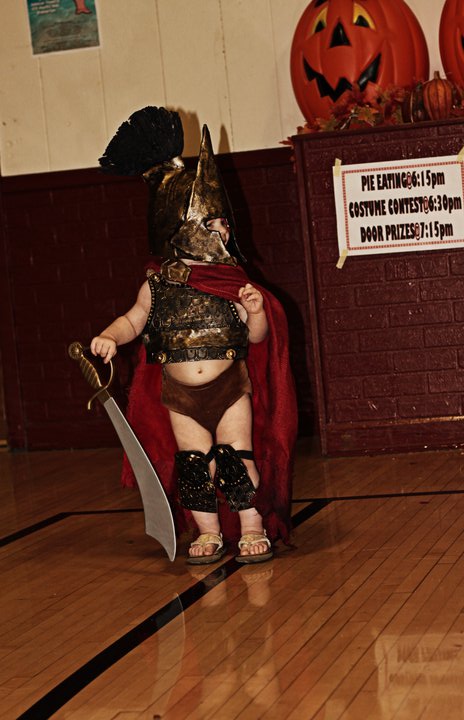 Dollar Store Crafts reader Cristi H. posted this Spartan warrior on the DSC Facebook Fan page! So cute and hilarious!! I LOVE the tummy showing — such a great homage to the famous abs of the movie 300. I might have to do a dedicated post on this one, because Cristi has “making of” photos on Facebook. 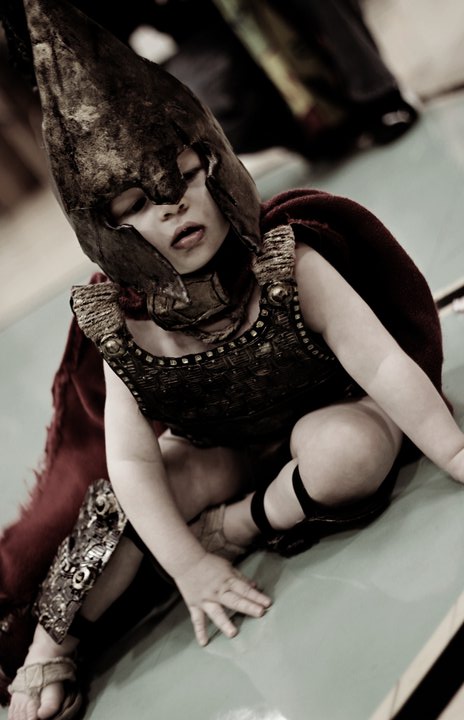 Another shot of King Leonidas. Cristi said: I purchased the “chest plate” from the dollar store, then reconstructed it into a new chest piece, and shin guards. the cape i made out of two types of fabric, pin i made from clay, helmet i made from a diaper box, fabric and string (and lots of hairspray lol). 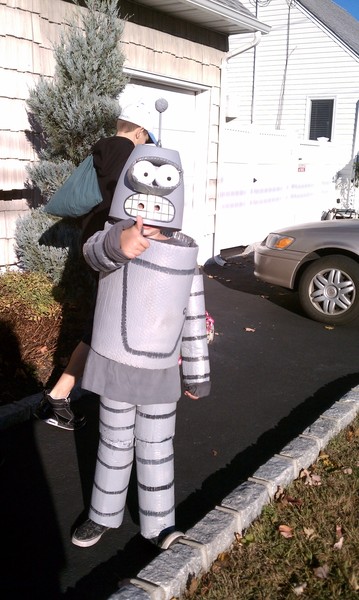 Bender from Futurama Costume: (from here) 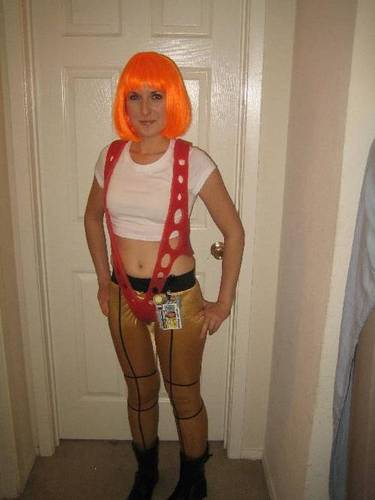 Leeloo from The Fifth Element

. She made her own suspenders out of liquid silicone (using this tutorial from Jia Jem) and bought the spandex pants readymade, but hand-sewed black elastic stripes onto them by hand:

It took about six hours to sew the two vertical stripes on the front because the elastic and spandex stretched at different rates, so the pants had to be held taut the entire time.  I didn’t sew the back stripes due to time (and sanity) contraints, and the four horizontal stripes were actually just sewed as loops, pulled onto the legs and tacked into place rather than entirely sewed on. I just sewed 2 inch black elastic as the waist band instead of purchasing a belt. The wig is a cosplay wig that was midback length and trimmed to the shoulders.  I couldn’t do the twisties in the hair because it made the tracks visible. My dad made me an amazing Multipass and a stencil for the elements tattoo. The shirt was just a purchased shirt which I cropped. 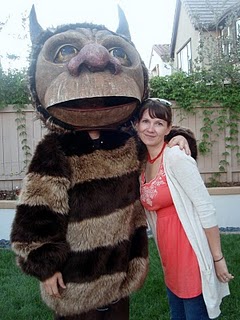 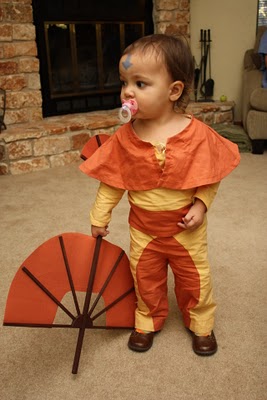 Aang, the Avatar (the last Airbender) Costume: by metria on Craftster

The whole family dressed as airbenders, but by far the cutest is baby Zoey as Aang! More about the costumes here 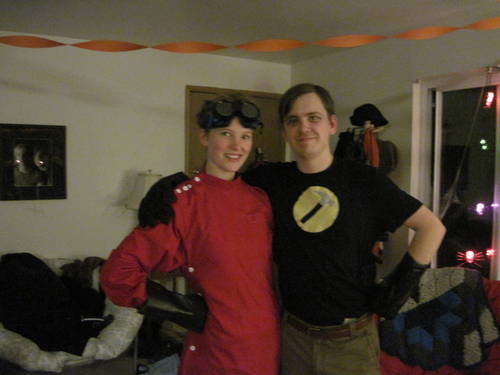 Craftster user mellifluousfondue made her own Dr. Horrible

and Captain Hammer costumes (just a sidenote, kudos to her for using this as a couples costume!!). She sewed the Dr. Horrible smock (without a pattern!) and appliqued the Captain Hammer shirt. The gloves are from the hardware store and Dr. Horrible’s welding goggles 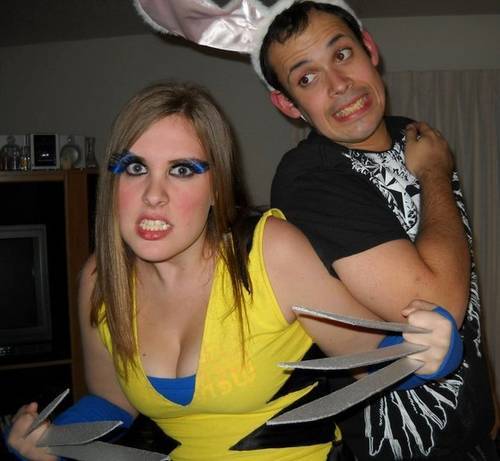 Craftster user cxcaitlyn made a costume inspired by Wolverine’s classic yellow, black, and blue look, and she made it on a college kid’s budget! My favorite thing about her costume are the awesome claws (who wouldn’t want to sport those?) which she made from a Wolverine Claws tutorial by BadgerLALA.

Most of the costume was made using t shirts and cardboard — boot covers were made with blue t-shirts, and the belt buckle and claws were made with pizza cardboard. She appliqued a tank top with black t-shirt stripes. 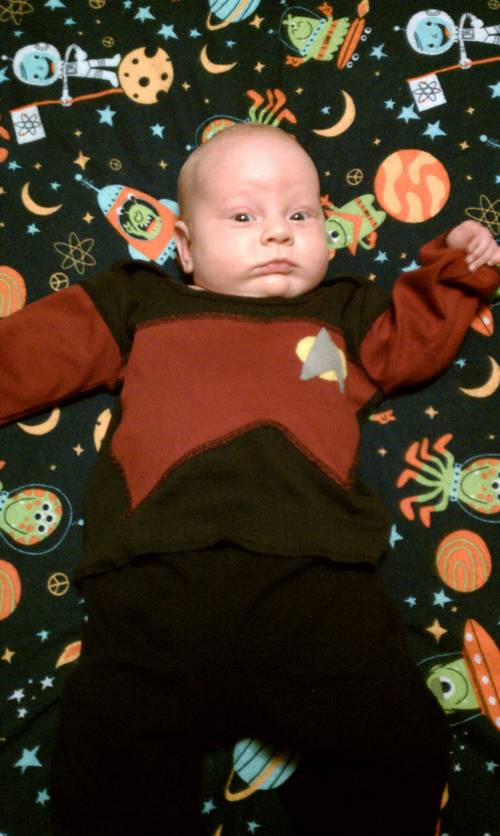 Craftster user VeggieJess made her 8 week son a Captain Picard (from Star Trek: The Next Generation just in case anyone’s asking) costume. Looks like she sewed the whole costume from scratch. If you wanted to go the easier route, you could paint maroon on a black longsleeve t-shirt (mask it off with masking tape first), and then applique a Starfleet insignia on, or heck, use sparkly self-stick craft foam. 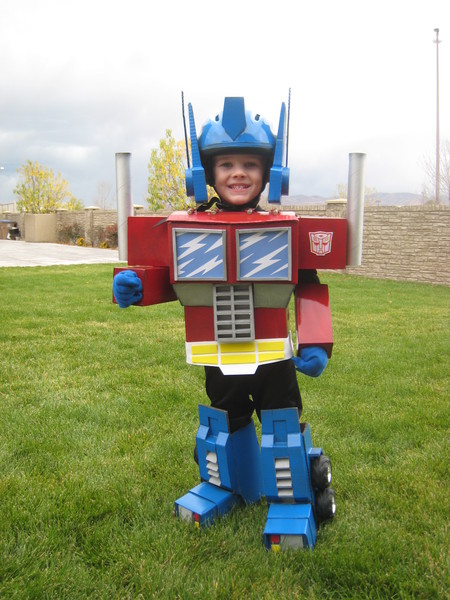 The creator of the costume said this: Optimus Prime costume with real working lights on the top of the chest. Made from cardboard boxes and foam board. Designed like the original first generation Optimus Prime.

Again, a complex and amazing-looking costume I couldn’t really begin to guess about. But you could use cardboard, duct tape, and self-stick craft foam. Have at it!

p.s. Here’s an amazing transforming Transformer costume that a dad made for his son (he made it in 2 days) – watch this video even if you usually don’t! (via a post in the comments, and this blog) 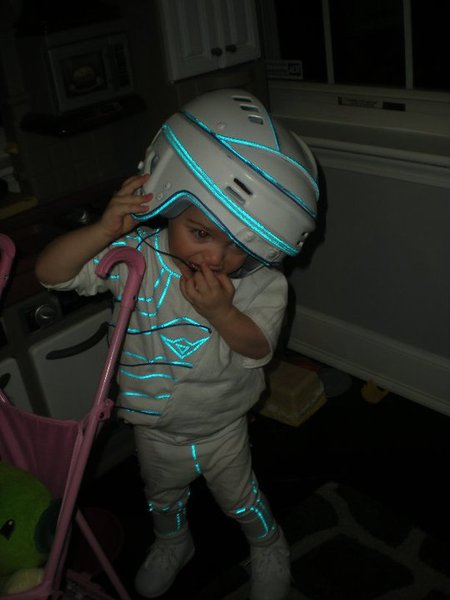 If I was going to make a TRON costume, I would get a white (or grey) sweatsuit, a whole lotta blue glowsticks and an old bike helmet. Since the new Tron movie is coming out soon, I bet this will be a popular costume for Halloween 2011. 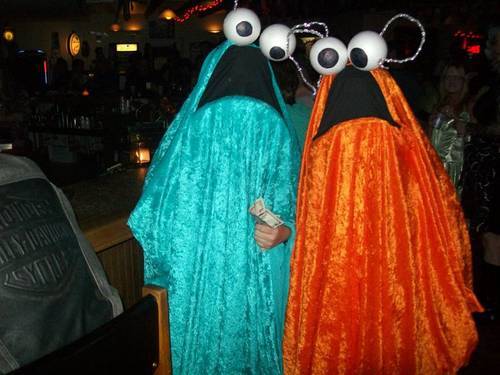 Craftster user jessvict made these Sesame Street alien costumes. I found a tutorial on how to make Yip Yip costumes by sliny at Instructables. 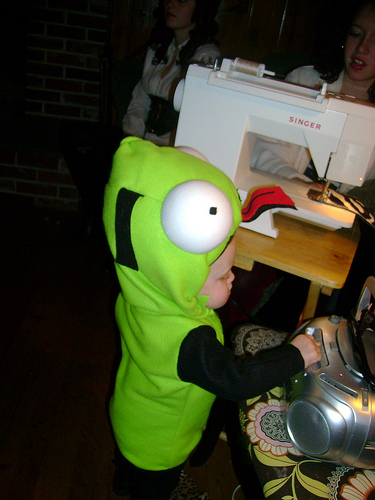 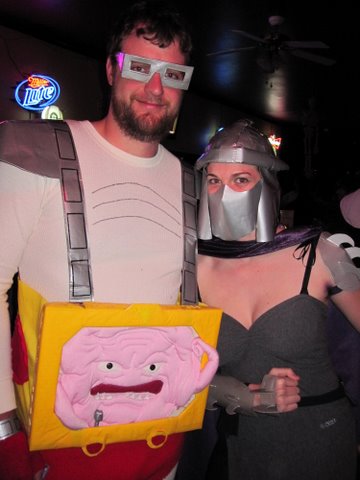 It started as a lazy plan to paint Krang (the disembodied brain and owner of the awesome Technodrome) on the guy’s stomach.  He wasn’t so excited about trying to go out without a shirt, so I turned to my own crafty brain and mostly things I had laying around the house (and a lot of duct tape!).

Shredder is mostly tagboard, duct tape and a lot of staples. With a thrifted grey polo and black t-shirt scraps for belt (which was a tiny fannypack for my ID and camera), oh and some awesome sparkly purple for the cape.

Krang is amazing! Check this out: 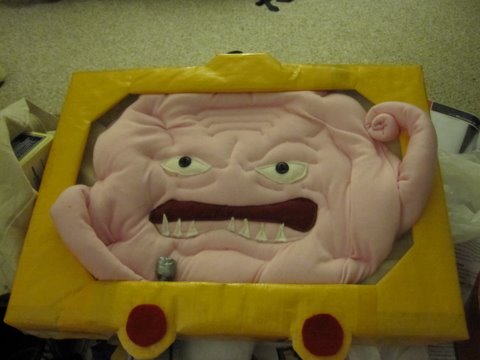 Krang is a fabric and batting creation with a cardboard “house” that is covered in a yellow dog food bag, and a tiny joystick! 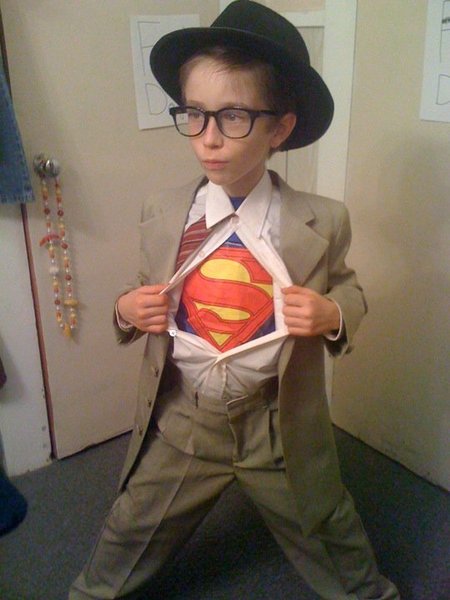 This parent was clever, and combined two school projects into one: So that I wouldn’t have to do 2 costumes back-to-back, we transformed my son’s school career day costume (attorney) into Clark Kent/Superman for Halloween! 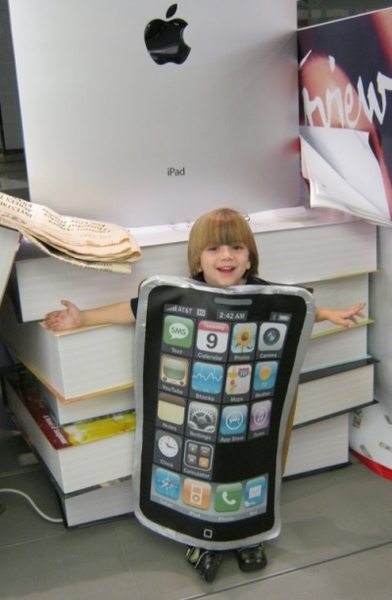 My 4 year old son Z. wanted to be an iPhone for Halloween this year. The base is a large piece of leather with elastic straps for his shoulders. The icons and apps were printed on fabric, measured, and applied to the leather. The silver trim and Apple logo were made from faux leather attached with fabric glue. The photo was taken at the Apple Store! Hope you like it as much as we do! 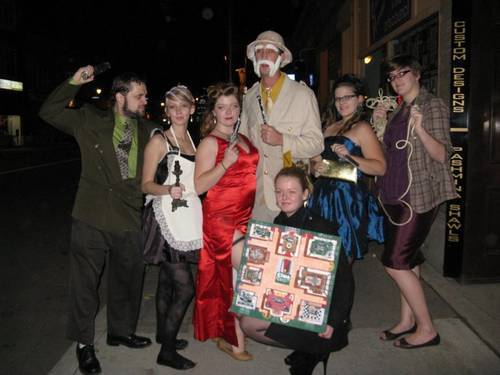 Group Costume: Clue Board Game Costumes by cherry_blossom55 at Craftster.

Said the creator: The costumes were made by altering clothes from the thrift store:

*Note from Heather: you could get some of this stuff at the dollar store. Mostly the weapony stuff.

And moving from the game costumes to the gaming costumes: 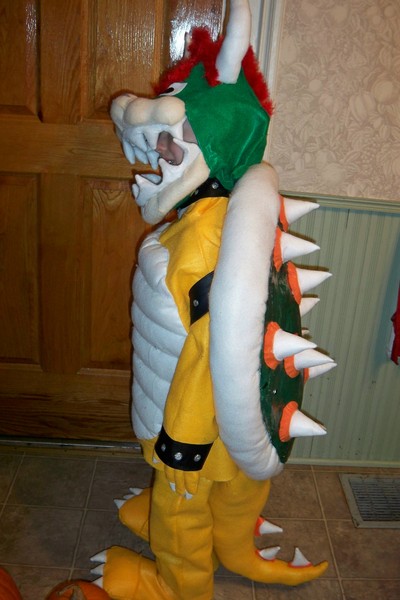 The creator of this costume said: Our son asked to be Bowser this year from then Mario Brothers video game. Of course we could not purchase this costume so we used some
creativity! Took about a week and a half and cost under $35! Started with an old baseball hat, some styofoam balls and LOTS of felt! He LOVES his costume! 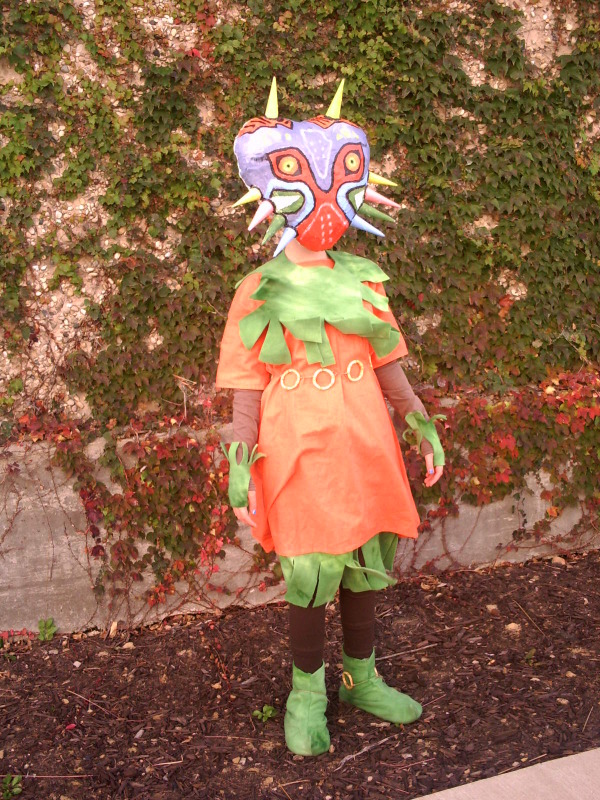 Skull Kid, Legend of Zelda Majora’s Mask Costume by choleblack on Craftster (blog: slightly obsessed) – the mask was papier-mached over a mylar heart balloon! The shoes were modded flip-flops with elf-like socks over them.

My 10 yr old DD is a huge video game fanatic. Her favorite series is, obviously, Legend of Zelda. When asked what she wanted to be for Halloween, she knew exactly, Skull Kid from Majora’s Mask.

This turned into a joint family project, with DD working with either myself or her father on our respective parts. All told it took about a week of afternoons to complete. DD & her dad were in charge of the mask (with some “ideas” from me). The mask is papermache and acrylic paints. It was built over a Mylar heart shaped balloon. The spikes are cut off ends from birthday hats glued in place. We mounted the finished mask to the support from a welding mask. This worked really well & was very stable.

However, we forgot to plan for eye holes & the mask was just TOO COOL to cut into! So she ended up carrying it more than wearing it. We also didn’t account for the welding
helmet when I made the hat, but she ended up being able to wear it under the helmet. It’s just too small to be really noticeable, especially compaired to that awesome mask!

I was in charge of the clothes, but DD did most of the cutting & even a bit of the sewing on the tunic. The tunic is quilters cotton, the rest fleece. Both have a mottled color pallet which DD says “looked like the woods with light in the trees.” I’m really proud of the shoes … I made over sized socks and altered the toes to give them an elf like point. To give them soles, I slipped a pair of old flip-flops inside. All DD had to do was put her foot into the flip-flop and they were both solid & secure for miles of Trick-or-Treating. 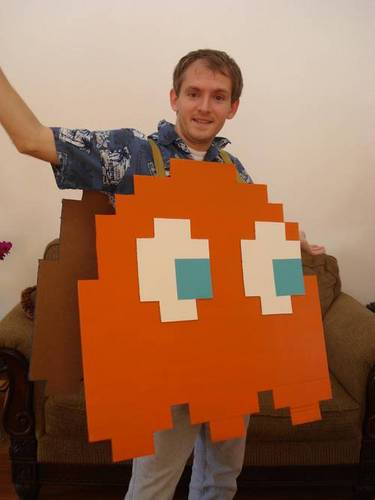 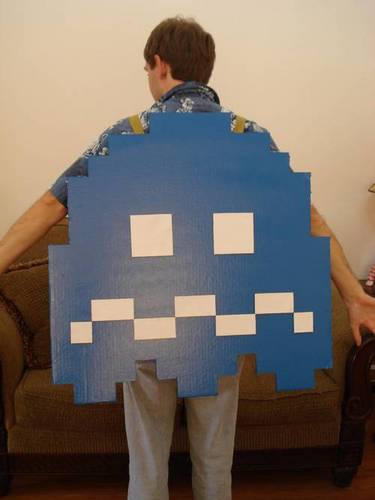 Craftster user weirdsisterofprimerib (ha ha, love the username!) made Blinky and Clyde (the red and orange ghosts from Pac-Man) costumes. The front shows the full-power ghost, and the back is the ghost after he’s been chomped by a power-pelleted Pac-Man. She generously provides a tutorial for the costume (which she made from painted cardboard & leftover quilt binding) at her blog, Wonky Face Crafts: Make an 8-bit video game character costume, part 1 and part 2 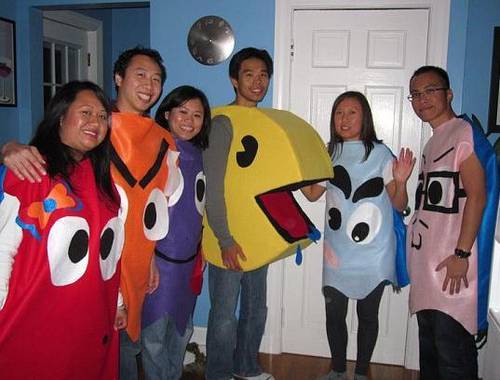 Not much info on how these costumes were made, but it looks like the ghosts were made from felt and a cardboard frame was underneath the Pac-Man Costume. 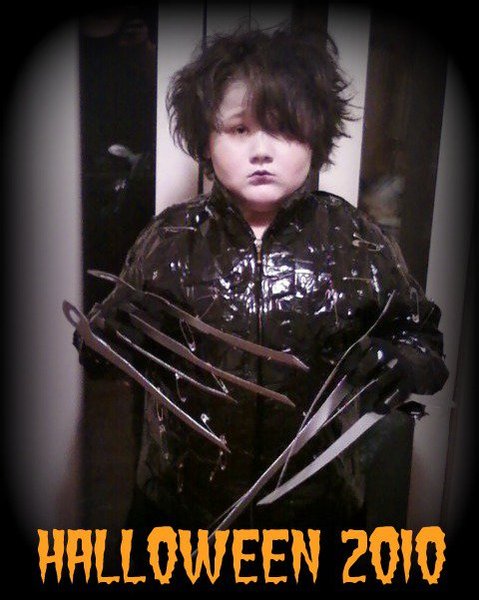 The person who posted this costume said: my nephew was Edward Scissorhands.. my sister made his costume of spray hair dye, Halloween make up, black duct tape, painted cardboard and safety pins.. Not only did it come out GREAT it was economical!! 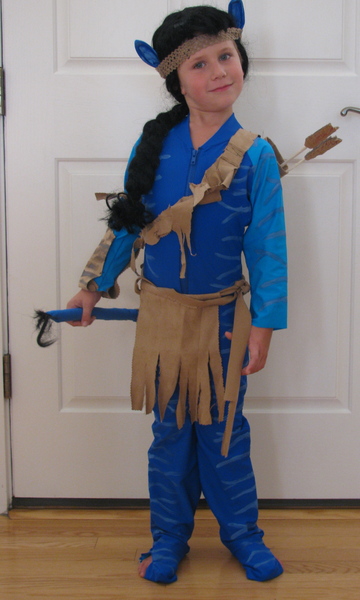 Jackson wanted to be the blue avatar, so I found a full swimsuit at the consignment for $1 used fabric paint for the detail and pieces of scrap material for the clothing and accesories. He loves it and wears it every day, hope it makes it til halloween!

Speaking of a completely different take on an Avatar costume: 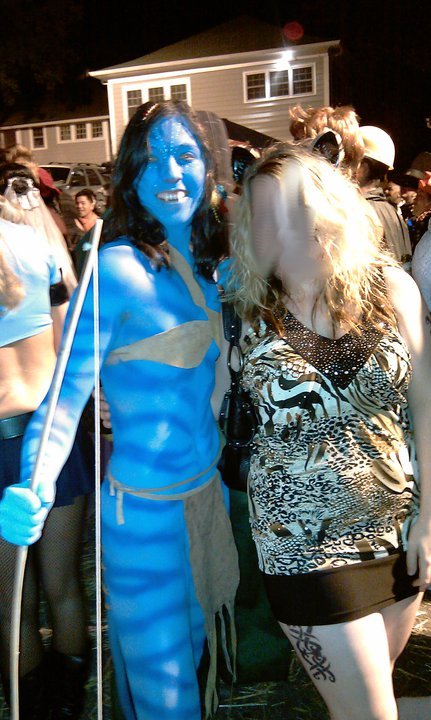 So this Halloween I decided to go as Neytiri from the movie Avatar. But I wanted to go all out, and I didn’t wanna wear the bodysuit they were selling at the costume store. So I got airbrushed and wore colored contacts and fake teeth. I made all the leather pieces: arm cuff, loincloth, and top.